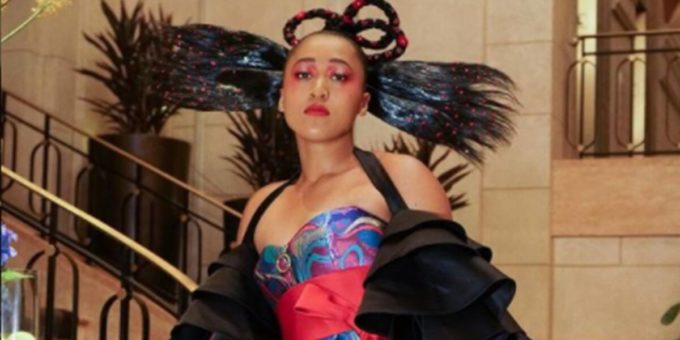 Naomi Osaka’s magnificent look at Met Gala 2021 caught the attention of one and all. She left onlookers in awe when she appeared in a custom Louis Vuitton purple and blue halter neck gown, teamed with a ruffled cape.

Add to that, her quirky braided hairdo, ankle length embellished black boots and eyes adorned with pink eyeshadow — all of which were combined to give her quite a stellar look.

Naomi’s Louis Vuitton outfit was co-designed by none other than her sister Mari, who recently took to social media to talk about the inspiration behind the dress.

In an Instagram post, Mari shared that the dress and look were a representation of a “blend of both our Japanese and Haitian roots”.

“When we first heard of the theme ‘American’ we thought of immigrants: they are what created America from the start and the blend of so many cultures and languages is what makes this country unique,” she shared. The theme for this year’s gala outfits was “American independence”.

Mari added that the ruffles were inspired from the traditional “Haitian Quadrille dress” or the ‘karabela’ dress. And the huge red belt tied over the gown was derived from the ‘obi’ or sash worn over a Japanese kimono.

Mari wrote, “From idea to concept sketch to the making of the actual dress, this whole process was an amazing one…Thank you very much for the opportunity to help create this dress to everyone at @louisvuitton and @nicolasghesquiere AND MOST IMPORTANTLY my adorable sister @naomiosaka for being the absolute goddess to pull it off.”

Indian Cooking Tip: How To Make Spicy Mutton 65 At Home

Pooja Bhatt opens up on what Alia Bhatt, Mahesh Bhatt talk about over dinner
2021-05-20