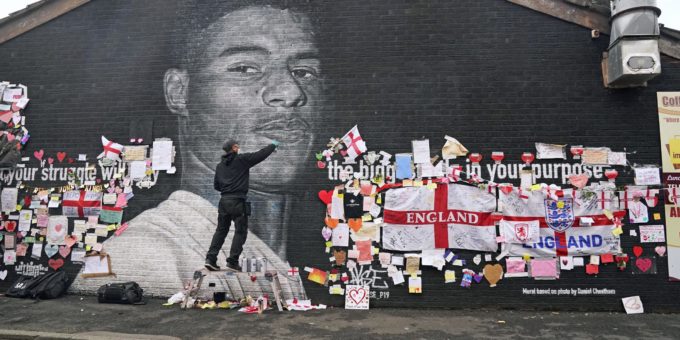 Vandals who defaced a mural of England footballer Marcus Rashford should be educated rather than punished, the founder of a community street art project has suggested.

Withington Walls founder Ed Wellard told ITV’s Good Morning Britain on Tuesday that the artist who created the mural in Withington, Manchester, was coming back to work on it this morning.

The mural was defaced within hours of England’s loss to Italy in the Euro 2020 final, in what police are treating as a racist incident.

When asked what punishment the vandals should be given, Mr Wellard said: “Racism is learned behaviour, I think it should be more about education than punishment.

“There needs to be active discussion about racism in this country, within sport, within society, on social media, and I think it’s heartening this sorry incident is allowing us to have those discussions because that’s the way we will move forwards as a country.”

Within hours of the mural being defaced, local residents had covered it in messages of support and hearts with “hero” and “Marcus for Prime Minister” written on them.

England flags have also been posted around the mural, and fans supporting a range of clubs, took to social media to condemn the racist attacks against the Manchester United player.

Rashford thanked fans for their support, tweeting: “The messages I have received today have been positively overwhelming and seeing the response in Withington had me on the verge of tears.

“The communities that always wrapped their arms around me continue to hold me up. I’m Marcus Rashford, 23 years old, black man from Withington and Wythenshawe, South Manchester.

The word “f***” was scrawled over the huge artwork of the England footballer, painted on the side of a cafe in Copson Street.

Rashford, Bukayo Saka and Jadon Sancho, who all missed their penalties, were targeted with racist abuse on social media after the game.

Greater Manchester Police (GMP) said they were called at 2.50am on Monday to reports of the racially aggravated damage to the mural.

Chief Superintendent Paul Savill said: “This is disgraceful behaviour and will absolutely not be tolerated.

“Greater Manchester prides itself on being made up from a number of diverse communities, and hate crime in any form is completely unacceptable and not welcome here in our city.

“GMP takes crimes of this nature very seriously and an investigation has been launched.”

Manchester United tweeted a video of the notes left by fans and called Rashford an “inspiration”.

The mural, based on a photograph by Daniel Cheetham and painted by street artist Akse, was created last November in collaboration with Withington Walls.

It was reportedly commissioned in recognition of Rashford’s work to tackle child food poverty.

His mother provided the quote on the mural, which reads: “Take pride in knowing that your struggle will play the biggest role in your purpose.”

A crowdfunder set up to raise funds to repair the mural and keep maintaining it had raised more than £27,000 by Tuesday morning.

“I can never believe whatever has happened,” Hiba Nawab on rape allegations on Pearl V Puri : Bollywood News
2021-07-29

Cameraman Films Cockroach Instead Of Hockey Match, Twitter In Splits
2021-07-29