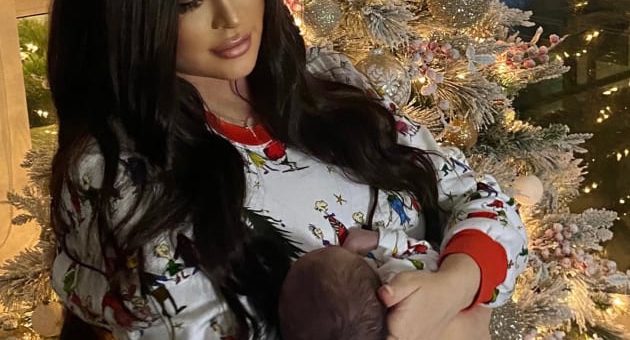 Maralee Nichols has spoken out for the first time since suing Tristan Thompson for paternity of her son.


And the personal trainer has A LOT to say.


She also has something very specific and adorable to show:


An actual photo of this newborn!


On Friday, the Houston-based personal trainer took to Instagram and unveiled the very first picture of her baby boy, about two weeks after the public learned she had filed a lawsuit against Thompson.


As previously detailed, this lawsuit alleges that Nichols and Thompson carried on a months-long affair… culminating in an unprotected bedroom romp in March that resulted in a pregnancy.


Nichols also submitted an alleged Snapchat message from Tristan, in which the basketball player offers herr $75,000 in hush money.


Thompson also emphasizes in this message, according to Nichols, that he has no intention of basically ever seeing his own kid.


“Instead of focusing on any negativity, I am choosing to embrace being a mother and doing the best I can for my son,” Nichols said in her statement on Friday.


“I do not want any further media attention, nor do I want a romantic relationship with Tristan.”


“My goal is to raise our son in a safe, healthy, loving and private environment.”


For his part, Thompson has denied having any sort of serious relationship with Nichols.


He has, however, admitted to sleeping with her on the night of his birthday in March.


“We saw each other sporadically between December 2020 and March 13, 2021,” Thompson wrote in his legal response to Nichols’ lawsuit, adding:


“[Nichols] told me that she had been involved with other athletes and understood the limitations of our relationship; to wit, that we might see each other on a sporadic basis for consensual sex only.”


Speaking to E! News, though, Nichols takes issue with this characterization.


“Over the past couple of weeks, many inaccurate and false stories have been circulated about me,” she tells the outlet.


“I have not at any point released — nor have I directed anyone else to release — any information regarding Tristan Thompson or any litigation involving him.


“I have never spoken to any media outlet, nor have I leaked any information to anyone at any time.


“I am providing this statement because I feel I must defend my character.”


Thompson, of course, was dating Khloe Kardashian at the time he was sleeping with Nichols.


The stars broke up months ago and Khloe has not yet commented on this whole baby saga.


“I have seen fake stories, unflattering photos of me, people using photos that are not even me, stating an incorrect occupation and age,” Nichols went on to E!.


“There have been multiple fake Instagram posts claiming to be me, making false statements and attaching stock photos of a sonogram and a child (neither mine).”


Nichols goes on to speak her truth as follows:


“I do fitness modeling. I was never a personal trainer for Tristan.


“He told me he was single and co-parenting. I would never have gotten involved with Tristan if I thought he was in a relationship.”


According to Nichols, she told Thompson about her expecting status in North Carolina after he invited her to see him at the end of April.


In her message to E! News, Nichols states she did “everything possible” not to draw attention to herself throughout her pregnancy.


“I did not file any request for child support before our child was born. The case that Tristan brought against me was dismissed on December 15, 2021.”


She has not yet revealed the name of her son or provided any detaills beyond the above photo.


We’ll soon find out whether or not he now has a third child, following the one he has continued to ignore from a relationship with ex Jordan Craig; and the daughter with Khloe, who Tristan at least seems to hang out with from time to time.


You’d think the guy could afford a box of condoms.

ISL: Chennaiyin FC Move To Third In The Table With 2-1 Win Over Odisha FC