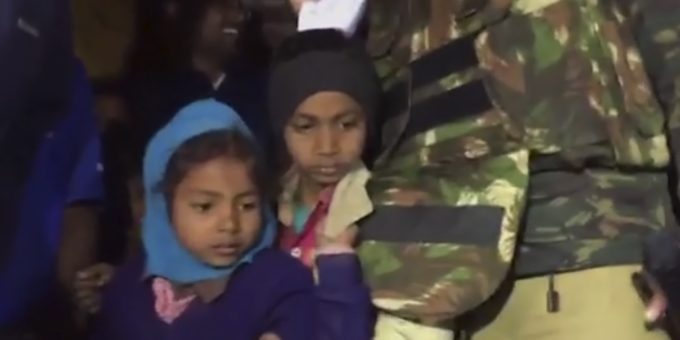 Authorities in northern India have rescued 23 children and killed the man who allegedly held them hostage for nearly 11 hours after inviting them to his home for his daughter’s birthday party, police said.

Officer Mohit Agarwal said two police officers were injured after the man, identified as Subhash Batham, fired at them on Thursday night as they tried to enter his home in Kasaria village in Uttar Pradesh state.

The exchange of gunfire occurred after efforts to negotiate Batham’s surrender over the phone had failed, police said.

Mr Agarwal said Batham was a suspect in a murder case who was out on bail.

The incident occurred in Farrukhabad, a small town 200 miles south west of Lucknow, the state capital.

Batham’s motive for taking the children hostage was not immediately known. He kept them in the basement of his home, police said, and was drunk when the police encounter occurred.

At one state of the stand-off, Batham handed a six-month-old girl to a neighbour from his balcony, but he later fired his weapon when anyone tried to speak to him, according to the Press Trust of India news agency, citing home secretary Awanish Awasthi.

Batham demanded to speak to a state legislator representing his area, but refused to communicate with the man when he arrived at the scene.

Bantham’s wife was also killed. Mr Awasthi said she died in the exchange of gunfire, but PTI reported that angry villagers beat her to death when she tried to escape.

A post-mortem will determine the cause of death, Mr Agarwal said.