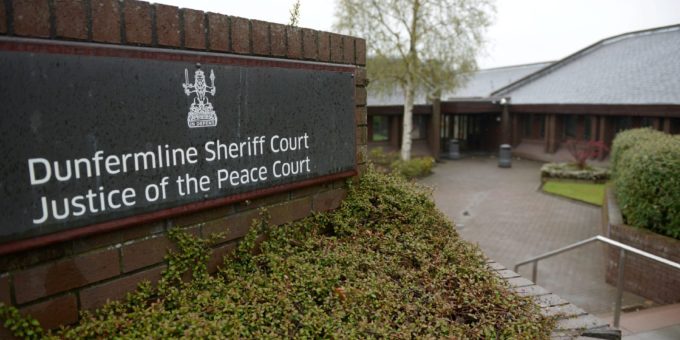 A SHOCKING incident of racist violence in a Kelty shop was captured on CCTV.

Edward Irvine ranted at shop staff, made racist comments then assaulted a member of staff.

He tried to barge his way behind the counter but his way was blocked by a security screen being pulled shut hurriedly.

Irvine, who had three children with him at the time, pointed continually in the face of the person serving him, shouting and swearing.

Irivine, 35, of Cartmore Estate, Lochgelly, appeared in the dock at Dunfermline Sheriff Court.

He admitted that on July 11 last year, at Costcutters, Cocklaw Street, Kelty, he acted in a racially-aggravated manner towards a shop worker in the course of his employment, acted aggressively, repeatedly shouted, swore and made offensive remarks to him.

He also assaulted the shopworker by throwing baskets at him, seizing hold of him and punching him on the head.

The incident, which lasted for around 10 minutes, was shown to the court and started with Irvine getting out of a car and entering the shop with three young boys.

An argument broke out at the counter as Irvine was being served. He appeared to become increasingly angry and agitated, flicking his hand towards the worker’s face.

At one point, Irvine seemed to be leaving, then ran back and tried to get behind the counter but an entry door was closed, blocking his way.

A child, who had been trying to pull him away, was knocked to the floor as Irvine ran towards the counter.

He then picked up shopping baskets and threw them at a worker, hitting him.

Irvine then picked up another object and lunged at a staff member with a struggle breaking out.

Sheriff Eric Brown called for reports and Irvine will return to court for sentencing on September 15.