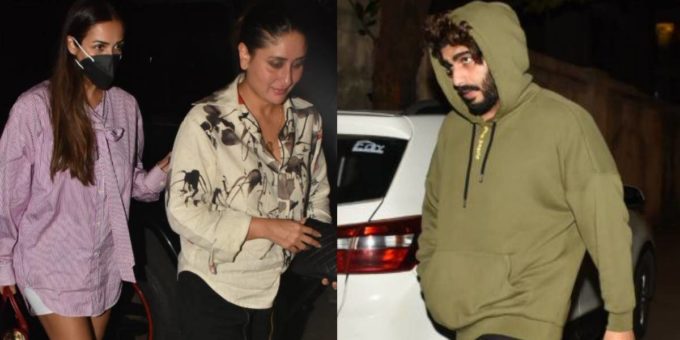 Malaika Arora rang in her 48th birthday with beau Arjun Kapoor and best friends Kareena Kapoor Khan and Karisma Kapoor. The actor-model hosted an intimate birthday party at her parents’ residence in Mumbai.

While Arjun came dressed in a sweatshirt, Kareena also opted for comfort wear for Malaika’s birthday party. Karisma was seen in a printed dress as she arrived for the party.

On Saturday, Arjun Kapoor had posted a sweet birthday wish for his ladylove Malaika. Sharing a picture of himself with her, the actor had written, “On this day or any other all I want is to make you smile…May this year you smile the mostest…” As he shared the photo, Kareena commented on it asking for the photo credit, “I want photo credit Arjun kapoor ji.”

Replying to Kareena, Arjun joked that he would want only her to click his pictures now. He also added, “Blocking you dates for 2/3 photoshoots… at Mehboob as always.” Sharing a screenshot of their fun banter on her Instagram account, Kareena wished Arjun a happy birthday on Malaika’s birthday. She wrote, “Happy birthday to you too.”

Kareena Kapoor shared a screenshot of her conversation with Arjun Kapoor on Instagram.

Arjun Kapoor and Malaika Arora often share glimpses of their bond via photos on Instagram. However, they avoid talking about each other in public. In a recent interview, Arjun said that he doesn’t try to be “overtly talkative” about his relationship because he wants to respect his partner and her past.

“I don’t try and be overtly talkative about my personal life, because I feel you should respect your partner, and there is a past there… And I’ve been in that situation where I’ve seen things pan out publicly and it’s not always very nice, because there are kids affected,” Arjun Kapoor told Film Companion.

Optimism in Gaza amid indications of reconstruction acceleration

Hafeez Shaikh removed from post due to rising inflation in country: Shibli
2021-03-29