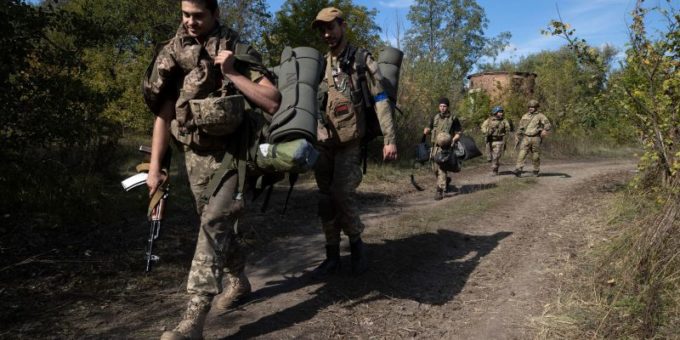 Russian forces retreated from Lyman, a strategic city for its operations in the east, the Russian defense ministry said Saturday, just a day after Moscow’s annexation of the region that’s been declared illegal by the West.

“In connection with the creation of a threat of encirclement, allied troops were withdrawn from the settlement of Krasny Liman to more advantageous lines,” the ministry said on Telegram, using the Russian name for the town of Lyman.

Russian state media Russia-24 reported that the reason for Russia’s withdrawal was because “the enemy used both Western-made artillery and intelligence from North Atlantic alliance countries.”

The retreat marks Ukraine’s most significant gain since its successful counteroffensive in the northeastern Kharkiv region last month.

Russia’s announcement comes just hours after Ukrainian forces said they had encircled Russian troops in the city, which is located in the Kramatorsk district of Donetsk.

Ukrainian forces said earlier Saturday that they had entered Stavky, a village neighboring Lyman, according to Serhii Cherevatyi, the military spokesperson for the eastern grouping of Ukrainian forces.

“The Russian group in the area of Lyman is surrounded. The settlements of Yampil, Novoselivka, Shandryholove, Drobysheve, and Stavky are liberated. Stabilization measures are ongoing there,” Cherevatyi said in a televised press conference on Saturday morning.

“[The liberation] of Lyman is important, because it is another step towards the liberation of the Ukrainian Donbas. This is an opportunity to go further to Kreminna and Severodonetsk. Therefore, in turn, it is psychologically very important,” he said.

Cherevatyi said the Ukrainian troops actions are setting the tone to “break the course of these hostilities.”

He added that there had been “many killed and wounded,” but could not provide any further details.

The head of Luhansk regional military administration Serhiy Hayday also revealed Saturday further details of the Lyman offensive, suggesting Russian forces had offered to retreat, but to no avail from the Ukrainian side.

“Occupiers asked [their command] for possibility to retreat, and they have been refused. Accordingly, they have two options. No, they actually have three options. Try to break through, surrender, or everyone there will die,” Hayday said.

“There are several thousand of them. Yes, about 5,000. There is no exact number yet. Five thousand is still a colossal grouping. There has never been such a large group in the encirclement before. All routes for the supply of ammunition or the retreat of the group are all completely blocked,” he added.

Yurii Mysiagin, Ukrainian member of Parliament and deputy head of the parliament’s committee on national security, referenced the move into Stavky on Saturday by publishing a video on Telegram showing a Ukrainian tank moving up the road with a clear sign indicating the region of Stavky. CNN could not independently verify the original source or the date.

A video posted on social media, and shared by President Volodymyr Zelensky’s chief of staff, shows two Ukrainian soldiers standing on a military vehicle attaching the flag with tape to a large sign with the word “Lyman.”

“We are unfurling our country’s flag and planting it on our land. On Lyman. Everything will be Ukraine,” one of the soldiers says to the camera.

Meanwhile on Saturday, the director-general of Zaporizhzhia nuclear power plant was detained by a Russian patrol, according to the president of state nuclear company Energoatom.

Director-General Ihor Murashov was in his vehicle on his way from the plant when he was “stopped … taken out of the car, and with his eyes blindfolded he was driven in an unknown direction. For the time being there is no information on his fate,” Energoatom’s Petro Kotin said in a statement.

“Murashov is a licensed person and bears main and exclusive responsibility for the nuclear and radiation safety of the Zaporizhzhya NPP,” Kotin said, adding, that his detention “jeopardizes the safety of operation of Ukraine and Europe’s largest nuclear power plant.”

Kotin called for Murashov’s release, and urged the director-general of the International Atomic Energy Agency (IAEA) to “take all possible immediate actions to urgently free” him.

Ukraine’s Ministry of Foreign Affairs “strongly” condemned Murashov’s “illegal detention,” calling it a “another manifestation of state terrorism from the side of Russia and a gross violation of international law.”

“We call on the international community, in particular the UN, the IAEA and the G7, to also take decisive measures to this end,” the ministry said in a statement.

And in Kharkiv, the Regional Prosecutor’s Office said Saturday that the bodies of 22 civilians, including 10 children, were found following Russian shelling on a convoy of cars near the eastern town of Kupiansk.

The cars were shot by the Russian army on September 25 “when civilians were trying to evacuate,” it said in a Telegram post, adding that an investigation was ongoing.

Ukraine’s Security Service (SBU) and police had “discovered a convoy of seven cars that had been shot dead near the village of Kurylivka, Kupiansk district,” on Friday, Kharkiv Regional Prosecutor’s Office said.

The SBU confirmed on Telegram they would be investigating a “war crime” where at least 20 people died in “a brutal attack.”

CNN could not independently verify the allegations. There has been no official Russian response to the claims made.

The developments come as Russian President Vladimir Putin announced Friday that Russia would seize nearly a fifth of Ukraine, declaring that the millions of people living there would be Russian citizens “forever.”

Under the annexation process, which is regarded by the West as illegal, Moscow now recognizes four Ukrainian regions as Russian territory: Luhansk and Donetsk – home to two Russian-backed breakaway republics where fighting has been ongoing since 2014 – as well as Kherson and Zaporizhzhia, two areas in southern Ukraine that have been occupied by Russian forces since shortly after the invasion began.

Prashant Kishor To Embark On 3,500-Km ‘Padyatra’ In Bihar From Sunday

“Change” Against “If Satisfied Already…”