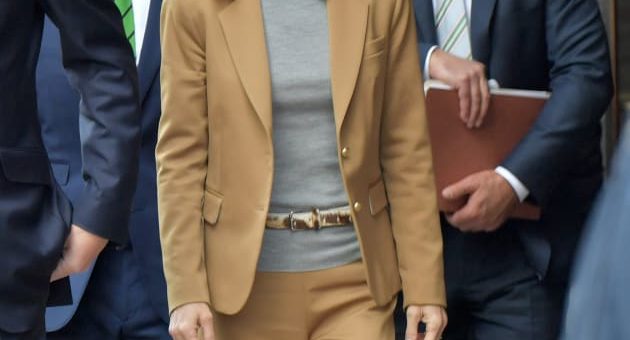 Just last week, we reported that Lori Loughlin had essentially given up on life ahead of her looming legal battle.


As you’re probably aware Loughlin is facing prison time for her alleged role in the college admissions bribery scandal.


The former Full House star stands accused of shelling out $200,000 in bribes to help her two daughters gain admission to USC.


If convicted, Loughlin could face up to 10 years in prison.


Loughlin refused a plea deal that could have gotten her off with a slap on the wrist, similar to the 2-week sentence received by fellow actress and alleged co-conspirator Felicity Huffman.


And last week’s dispatch from the inner circle of Lori and husband Mossimo Gianulli had the couple indulging in every vice under the sun in order to distract themselves from the possibility that they’d soon be doing time.


But over the past couple days, a handful of new developments have unfolded which seem to indicate that the couple is expecting to get off scot-free.


First, Lori and Mossimo put their house up for sale.


Normally, that’s a bad sign, as it indicates that the defendants are looking to downgrade in order to free up more cash for their legal defense.


However, sources close to the couple say Lori and Mossimo move to a new crib every 3-4 years, as real estate and design are Gianulli’s passions.


You generally don’t take on a project as big as buying and decorating a 20,000-square-foot mansion if you’re planning to be shipped off to Club Fed in a few months.


And what’s the cause of Lori and Mossimo’s sudden optimism?


Well, according to TMZ, their attorneys are going on the offensive with what they say is evidence that will blow the case wide open.


The couple’s lawyers are alleging that prosecutors withheld evidence in hope of luring Lori into accepting a plea deal.


From the start, Loughlin and Giannulli have claimed that they thought the money they paid to ringleader Rick Singer went partially to his charity and partially to various programs at USC.


This is a key distinction, as prosecutors say Singer took the money, pocketed some, and passed the rest on to then-USC Senior Associate Athletic Director Donna Heinel, who accepted the Giannulli girls into the school’s crew program, even though neither of them had ever rowed.


Whether he did so with or without Lori’s knowledge is a crucial matter.


“Rick Singer has advised the government, in sum and in substance, that … the families that do the side door …typically do not know that Heinel is involved until the time of the first payment,” reads a court filing from Lori’s attorneys.


“Giannulli and Loughlin thought their payment of $50,000 went directly to USC’s program,” the document continues.


“The government clearly acknowledges that Giannulli and Loughlin’s alleged ‘bribe payments’ did not go to any USC official personally, but rather went to USC itself.”


It’s that last part that Lori’s lawyers say the government withheld in order to sucker her into a plea deal.


For months, legal experts have been calling her a fool for her refusal to cooperate with prosecutors, but now, it looks like there may have been a good reason for Lori’s subtle courtroom smile.