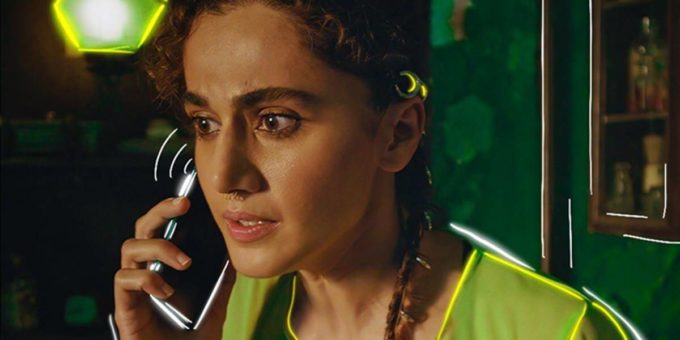 Actor Taapsee Pannu says she went for the script narration of Looop Lapeta, the Hindi remake of the 1998 German film Run Lola Run, with an intention to turn it down but was drawn to the central character.

The upcoming Hindi thriller, helmed by Aakash Bhatia, follows an adventurous ride through a sticky situation where a girlfriend (Pannu) is on a mission to rescue her boyfriend (Tahir Raj Bhasin). In the film, Pannu’s character is stuck in a time loop and gets multiple chances to save Bhasin’s life.

“I said yes to it (Looop Lapeta) instantly because it was so funny. Today, it makes you feel that this concept was made for India more than the German classic that it was. Hence, I ended up saying yes. The film is a clutter-breaking take on new age romance, a genre I am exploring for the first time,” the actor told PTI in a Zoom interview.

Taapsee said her initial hesitation with the film had to do with the fact that her 2019 film Game Over had already employed the time loop concept.

“I had done a film called ‘Game Over’, which had something similar in it. I didn’t want to repeat a concept in another film so I went with the intention to say no. I told the producer Atul (Kasbekar) that I haven’t seen the original film but I know the basic storyline and concept. But he told me to just hear out (the script). And if it still seems similar and if I don’t want to do it, then it is okay.” The film, however, offered her the chance to experience and explore the same world with varied nuances, which the actor found thrilling.

“It was exciting to explore how in the same situation and the same problem, I can handle and react in different ways three different times. Like, a stretch of the run can be different in three different loops. As an actor, I enjoyed it and was exhausted also but I kept myself on my toes. I had to go through the same set of hurdles but in a different mood. It was an interesting exercise to perform.” The actor said she was amazed by the massive success of Run Lola Run, directed by filmmaker Tom Tykwer, in 1998 and hopes Looop Lapeta is also able to recreate that.

“How ahead of its time it must have been to release this film in 1998 and what kind of conviction it would have required for makers to attempt this in 1998,”she wondered.

Taapsee Pannu, who has emerged from back-to-back success of Rashmi Rocket and Haseen Dilruba on OTT platforms, said she is in a better position today to choose films.

“Things have changed for good in terms of the options and choices that I have now to choose from. This happens because my films get acceptance. Like, if my one film that is out-of-the-box gets accepted, then I get ten options and that is what happened with Haseen Dilruba and Rashmi Rocket,” Pannu added.

The acceptance towards her films from the audience, the actor said, only validates and pushes her to further believe in her choices.

“When my films get accepted, it validates my choices. And I have made a career out of choices. People know me for my choices. Besides, I get more courage to choose such not conventional subjects and films in the future as well,” she added.

In one of her recent posts on Instagram, Pannu had said she runs behind some films and some have thankfully fallen in her lap, her upcoming release Looop Lapeta being the latter.

“I don’t run after movies anymore. Maybe I run behind filmmakers now if not movies. I still do that because there is no one else who is going to do that job for me. I am here on my own so I have to do it myself,” the actor said.

Taapsee Pannu, who launched her production house Outsider Films last year, is also in talks for a project with actor Samantha Ruth Prabhu.

“There is something that I have offered Samantha where I am a producer and she is the actor. But nothing more substantial has happened,” she informed.

Looop Lapeta, also starring Dibyendu Bhattacharya, Shreya Dhanwanthary among others, will release on Netflix on February 4. It is produced by Sony Pictures Films India, Ellipsis Entertainment along with Aayush Maheshwari.