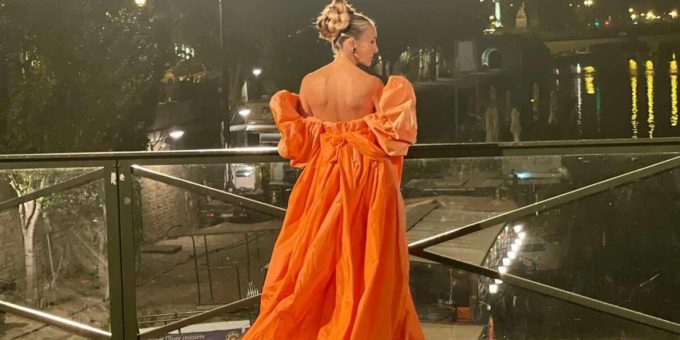 Sex and the City sequel ‘And Just Like That‘ wrapped up with its finale episode, and Carrie Bradshaw, one of the show’s most iconic characters, left her fans something to remember the whole series by.

Played by Sarah Jessica Parker, in the episode, Carrie appeared in a big, bright, voluminous gown to bring the show, which has been known for its memorable fashion moments, to a fabulous close.

Carrie opted to wear a Valentino gown complete with colour-blocking Opera gloves in pink to spread Mr Big’s ashes off a bridge in Paris. She styled it with multiple pairs of earrings and a braided, big bun in what is a superbly elaborate outfit for a sad occasion. But keeping Carrie’s character in mind, that’s how she was supposed to do it.

Molly Rogers, one of the show’s costume designers, said that Parker didn’t have to try on any other dress for the finale episode. In an interview with InStyle, Rogers revealed that Sarah said, “look no more” after seeing the outfit. “It was the only gown that came into the room,” said Rogers.

Her hair was tied in a big, braided bun and she chose the cluster earrings herself. (Photo: Sarah Jessica Parker/ Instagram)

Rogers further shared about the strapless Valentino gown with a bow at the back, “We wanted to add a puffy stole as well, off the shoulders, but the simplicity of the gown with her hair choice seemed like enough…if we could keep her warm!”

She also revealed that Carrie’s mismatched, cluster earrings were Parker’s own choice.

Watch: How To Make Winter-Special Palak Dal For A Wholesome Dinner