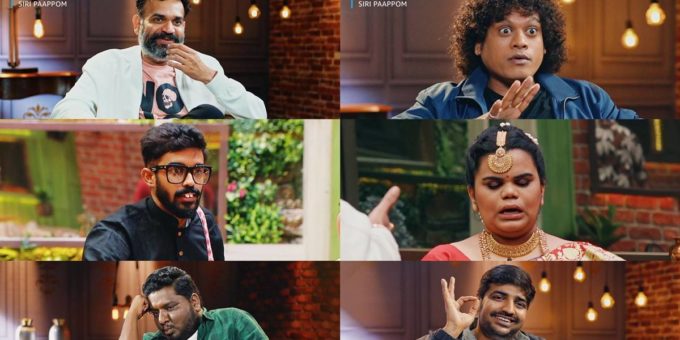 Amazon Prime Video’s LOL: Enga Siri Paappom is comedy icon Vivek’s first work to release after his untimely death in April this year. It is a bittersweet feeling to see him do what he does best – put a smile on our faces. The show gives us an example of the possibilities that Vivek could have explored through OTT platforms. Not to mention the charm, the grace and the energy he brings to the show as its presenter. It also pains to think about all the jokes he never got to tell or comedy skits larded with social messages that he never got to perform.

Vivek’s talent as a comedian would have unquestionably flourished in the age of streaming. And LOL: Enga Siri Paappom is proof of that.

The show’s format is very similar to Bigg Boss. A group of 10 comedians should spend six hours together inside a room fitted with multiple cameras. Every contestant is closely monitored by the two hosts. The top prize of the game is Rs 25 lakh. And to win it, all the contestants have to do is knock out their fellow contestants. Mind you, not with their fist but with their unique wit. Even as much as a smirk, he or she will be first shown the yellow card as a warning. And if the same person fails to control his or her facial muscles for the second time, he or she will be shown the red card, which is a sports metaphor for ‘you’re out’.

What’s so big a deal about keeping a frown face for six hours and returning home a millionaire, right? No. It is always easier said than done.

We either laugh at a joke if it’s funny or laugh at the person who made that joke if it is bad. Either way, we are bound to laugh as soon as a joke lands. So it takes some serious self-restraint when Powerstar Srinivasan dresses in the costume of a Greek queen and tries to perform some version of belly dance. It really takes some super-human strength like Pugazh not to burst out in laughter while performing improv with Harathi Ganesh staring right into your eyes, making hilarious comments and voices, standing so close you can feel her breath on you.

LOL: Enga Siri Paappom, which is co-hosted by Shiva, creates a perfect atmosphere for every contestant to demonstrate their comedy chops. Each contestant is allowed to put together their own act and perform it in a way they deem fit. The show gives a free hand to the comics to play to their strengths without any restrictions.

Watching the show, you may realise how vulnerable you are to humour. The contestants who got out in the first few episodes had no idea that they smiled. Smiling is so natural and involuntary. Chances are the harder you try not to laugh, the louder you end up laughing. Contestants RJ Vignesh Kanth, Pugazh and Maya S Krishnan deserve a special mention as their mere presence makes the show more pleasant.

The Latest From Afghanistan – The New York Times

Unknown Number Of Indians Left In Afghanistan, Most Evacuated: Centre

Cannabis producer CannTrust to destroy $77M worth of plants, inventory to regain compliance
2019-10-14