Breaking News
2022-05-24 A dedicated neural circuit in the retina detects shadows even in near-complete darkness — ScienceDaily 2022-05-24 What is the Quad? The partnership between the US, Japan, Australia and India explained 2022-05-24 Asian markets fall on China growth concerns 2022-05-24 Punjab Police raid houses of several PTI leaders ahead of ‘Azadi March’ 2022-05-24 Indian-Born Brothers’ New Startup Offers Thrill Of Better Office Wi-Fi 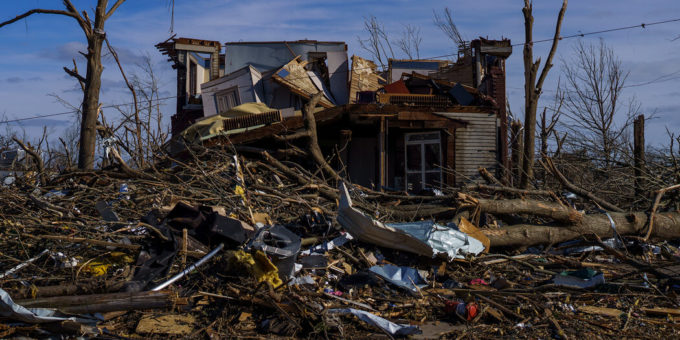 Tornadoes are relatively localized, short-lived weather events. And scientists are not yet able to determine whether there is a link between climate change and the frequency or strength of tornadoes, in part because they have a limited data record.

But researchers say that in recent years tornadoes seem to be occurring in greater “clusters,” and that a so-called tornado alley in the Great Plains — where most tornadoes occur — appears to be shifting eastward.

“This is what we would call a tornado outbreak, where you have a storm system which produces a number of tornadoes over a large geographical area,” Dan Pydynowski, a senior meteorologist with AccuWeather, said on Friday.

But such a large and powerful system in December is highly unusual, and something the region usually experiences in May or April.

“It’s certainly not unheard-of,” he said of tornadoes this late in the year, “but to have an outbreak of this magnitude, with this many tornado reports — it’s a little unusual for this time of year.”

Temperatures in Arkansas and Kansas on Friday were “spring weather,” Mr. Pydynowski said. Highs were in the 70s and 80s.

“It was unusually warm, and there was moisture in place,” he said, “and you had a strong cold front end. These are the ingredients for big storms in the spring, but not in mid-December.”

Even though scientists are observing more clusters, it is unclear the role that climate change plays. “For a lot of our questions about climate change and tornadoes, the answer is we don’t know,” said Harold Brooks, a senior research scientist at NOAA’s National Severe Storms Laboratory. “We don’t see evidence for changes in average annual occurrence or intensity over the last 40 to 60 years.”

In recent years, scientists have been able to draw links between a warming planet and hurricanes, heat waves and drought, attributing the likelihood that climate change played a role in isolated events.

“This is the hardest phenomenon to connect to climate change,” said Michael Tippett, an associate professor of applied physics and mathematics at Columbia University who studies extreme weather and climate.

The complexity of tornadoes, as well as a more limited data record, makes those types of studies challenging to perform.

The tornado record is still sparse compared with other types of events. One reason for this might be that tornadoes are relatively local weather events. Tornado records have largely been based on someone seeing a tornado and reporting it to the National Weather Service. This means that smaller tornadoes that occur in rural areas and have not caused property damage or injury may not be reported.

“We are pretty sure we know how many hurricanes make landfall in the United States each year,” Dr. Brooks said. “With tornadoes, we may not know how many occurred yesterday and last night.”

A more significant problem, however, is the complexity of tornadoes themselves. There are several ingredients that give rise to tornadoes, including warm, moist air at ground level; cool dry air aloft; and wind shear, or the change in wind speed or direction — each of which may be affected differently by climate change.

A tornado’s small size also makes it harder to model, the primary tool that scientists use when attributing climate change to extreme weather events.

Still, Dr. Tippett said that based on all the evidence, computer modeling showed that the environmental conditions favorable to tornadoes might increase in the future. “Our confidence is low, but the evidence points to the same direction.”

Turkey, Qatar criticize US designation of IRGC as terror group
2019-04-10