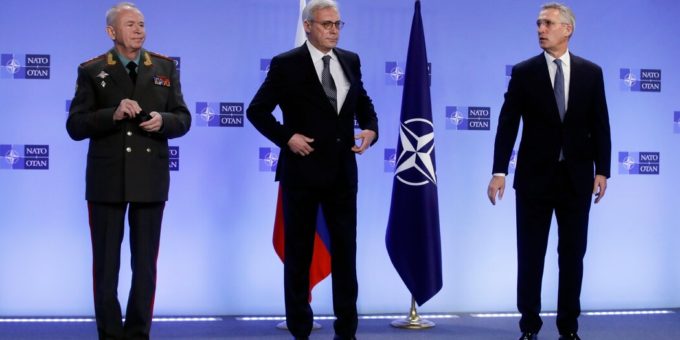 BRUSSELS — Russian and NATO officials said that they remained far from agreement after four hours of talks on Wednesday that the United States and its allies hoped would hold off a further Russian invasion of Ukraine and calm tensions between Moscow and the West.

“Our differences will not be easy to bridge,” the NATO secretary-general, Jens Stoltenberg, told a news conference after the talks at the bloc’s headquarters in Brussels.

At a separate news conference, Alexander V. Grushko, a Russian deputy foreign minister, said: “I want to say that the discussion was rather honest, direct, deep and comprehensive. But at the same time it showed a great amount of divergence on fundamental questions.”

Mr. Stoltenberg said that NATO allies urged Russia to “immediately de-escalate the situation in Ukraine,” where close to 100,000 Russian troops have massed near the borders, and to respect the sovereignty and territorial integrity of its neighbors. Russian representatives did not commit to pulling back the troops, nor did they reject the demand, officials said.

Russian is demanding that NATO not expand to include Ukraine or Georgia, both former Soviet Republics, and withdraw all allied troops from current NATO members bordering Russia.

NATO allies reaffirmed on Wednesday that they reject such commitments. Wendy R. Sherman, the deputy secretary of state who led the U.S. delegation to the talks, called some of Russia’s demands “simply non-starters.”

“This wasn’t an easy discussion, but that is exactly why this meeting was so important,” Mr. Stoltenberg said, adding that NATO allies and Russia had “a very serious and direct exchange on the situation in and around Ukraine, and implications for European security.”

The meeting at NATO’s Brussels headquarters was the second stop in a diplomatic roadshow focused on the Kremlin, after talks in Geneva on Monday between Russian and American officials. Looming over the high-level diplomacy is whether the Russian president, Vladimir V. Putin, will invade Ukraine as he seeks to pressure the West to roll back NATO’s presence in Eastern Europe, or de-escalate.

The United States and its NATO allies hope that Mr. Putin will decide to negotiate, as he is now confronted with threats of punishing economic sanctions and even of new deployments in NATO allies bordering Russia.

Mr. Stoltenberg and Ms. Sherman said that NATO allies had offered Russia a series of further meetings on wider issues of European security, including arms control and missile deployments.

Western officials said the Russian response was generally positive, but the Russians did not commit to more talks after this week. Mr. Grushko’s indicated that for now, Russia was not closing the door to further diplomacy.

Ms. Sherman said, “if Russia walks away,” it would be “quite apparent that they were never serious about pursuing diplomacy at all.”

She reiterated the U.S. position that before any discussion of other issues, Russia must first pull back from threatening Ukraine. She added that the fate of the Moscow-backed Nord Stream 2 pipeline, intended to transport natural gas from Russia to Germany, would depend on Russian de-escalation.

NATO has 30 members and so, in a sense, the meeting on Wednesday was 30 against one. Ukraine is not a member of NATO, though the alliance promised in 2008 that it would be someday.

NATO officials emphasized that they wanted to keep the focus on Russia’s large and continuing military buildup surrounding Ukraine, rather than on Russian desires to force a renegotiation of the post-Cold War security architecture in Europe.

After Monday’s talks, Sergei A. Ryabkov, who led the Russian side, denied that Russia had any intention of a new military invasion of Ukraine. At the same time, Mr. Ryabkov warned that if the West did not agree to Russia’s demands to pull back NATO’s footprint in Eastern Europe and reject any future membership for Ukraine, it would face unspecified consequences that would put the “security of the whole European continent” at risk.