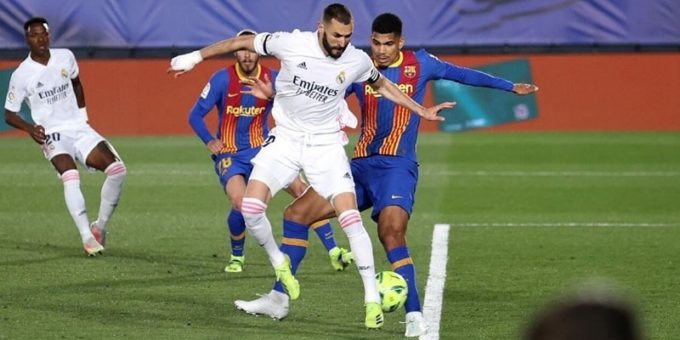 Real Madrid dominated the majority of the first half but a late goal brings Barcelona back in the match.

Barcelona
responded well after going behind but they need to keep up the same intensity
at the start of the second half.

Madrid would be hoping for more control in midfield and expect Toni Kroos, who had a quiet first half, to step up and dictate the tempo of the game.

Also, goes without saying, Luka Modric was so good in the first 45 minutes.

GOALl! Luuk de Jong brings Barcelona back in the game with the equaliser.

Barcelona struggling
to create clear-cut chances, largely due to lack of control over possession.
The Catalans have also been found wanting when it comes to transition
defending.

Real Madrid
firmly on top at the moment.

GOAL! Vinicius
Jr opens the scoring for Real Madrid with a brilliant finish.

Busquets loses possession, amid clever work by Karim Benzema, in his own half, which led to the goal.

Safe to say this was coming, considering the start to the match.

Real Madrid
on the front foot with lots of support from fans inside the stadium.

Benzema and Asensio have already taken a shot at goal from outside the box but they both went over the bar.

Well, that certainly brought back memories

They said the United dressing room were blown away by how good and smooth Benzema was.

Both teams warming up as we edge closer to kick-off.

Kick-off just around the corner in Riyadh ⚽️#ElClasico #Supercopa pic.twitter.com/NDvL16KIkK

Real Madrid’s
David Alaba is ruled out of the match due to muscular discomfort and is
replaced by Nacho.

Ferrán Torres, forward who joined the club from Manchester City for around 65 million euros, will make his debut for the Catalans.

Barcelona
are a massive 17 points behind Real Madrid in La Liga and were knocked out of
the Champions League in the group stage this season, making the Los Blancos
heavy favourites to win this encounter.

However,
Real’s coach Carlo Ancelotti was cautiously optimistic ahead of the match.

“In theory,
we are favourites,” said Ancelotti on Saturday. “But there is the theory and
there is what happens in practice.”

On the
other hand, Barca coach Xavi Hernandez believes that winning the match will
help the side re-establish themselves among Europe’s elite.

“It could be a turning point,” said Xavi. “Winning the Clasico will put us in the final and give credibility to the project. We are putting the league to one side to focus on a great competition. It’s a trophy.”

The winner
of this match will play either Atletico Madrid or Athletic Bilbao in Sunday’s
final in Riyadh.

Hello and welcome to the live blog for the Spanish Super Cup semi-final between arch-rivals, Real Madrid and FC Barcelona.

Amid BJP Crisis, Yogi Adityanath Could Have New Constituency: Ayodhya

Fiscal Deficit Estimated At 10.4% In 2021-22 If Disinvestment Target Missed: ICRA