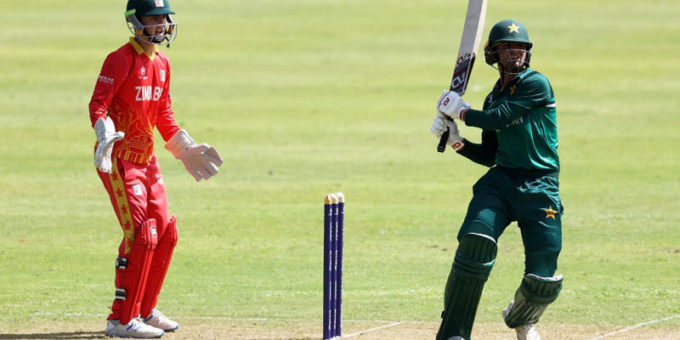 Pakistan U19 have set Zimbabwe U19 a target of 316 runs, courtesy a brilliant century by opener Haseebullah Khan.

Alex Falao was the pick of the bowlers for Zimbabwe, claiming five wickets for 58 runs.

Earlier, Zimbabwe won the toss and decided to bowl first in the ongoing ICC U19 Cricket World Cup match against Pakistan.

This will be Zimbabwe’s second group-stage match, after their thumping 228-run victory against Papua New Guinea on January 15. On the other hand, Pakistan are playing their opening match in the event.

Zimbabwe are in all sorts of trouble as they lose 6 wickets for just 91 runs.

Pakistan are all over Zimbabwe, at the moment, as the chasing side loses four wickets in quick time.

Ahmad Khan claims his second wicket after Awais Ali bagged his first one of the match.

A wicket each for pacers Zeeshan Zameer and Ahmad Khan as Zimbabwe struggle to chase the daunting target.

Despite losing flurry of wickets at the backend of the innings, Pakistan manage to post 315/9 against Zimbabwe 🎯

Zeeshan Zameer played a fiery cameo of 21* runs in 6 balls!

End of a splendid innings by Haseebullah Khan!

A brilliant 192-run partnership between Irfan Khan and Haseebullah Khan comes to an end as the former goes back to the hut after scoring 81 runs in 77 balls.

He has paced this innings nicely after a slow start.

Opener Haseebullah Khan, who has consumed 74 balls for 30 runs, has made a slow start as compared to his fellow batter Irfan Khan, who has reached 20 runs in 25 balls.

Abdul Faseeh, 27 runs in 36 balls, got a start but fails to convert it into something substantial.

Rishi Kapoor hospitalised, brother Randhir confirms he is not well
2020-04-29