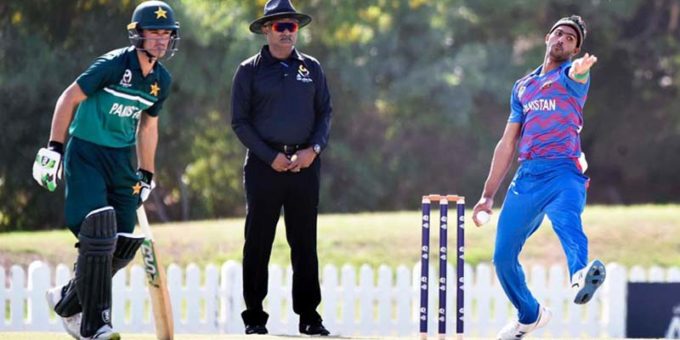 Pakistan
have won the toss and will bat first against Afghanistan in the ongoing U19
World Cup match at the Brian Lara Cricket Academy, Tarouba.

Bothe teams are heading into the match with convincing wins in their opening games of the event. Pakistan defeated Zimbabwe by 115 runs, meanwhile Afghanistan overpowered Papua New Guinea by 135 runs.

The winner of this match will put themselves in a great position to qualify for the knockout stage as table-toppers.

Abdul Faseeh keeps Pakistan in control with a well-compiled fifty.

Can he convert this into a century?

Noor Ahmad continues to impress as he claims his second wicket, Irfan Khan (4), of the match.

Abdul Faseeh holds key for Pakistan as he has consumed 64 balls for 34 runs. Captain Qasim Akram is unbeaten on nine runs from 11 balls.

The right-hander scored 43 runs in 51 balls.

Spinner Noor Ahmad, who will play for Quetta Gladiators in PSL7, has come on to bowl. Should be a good battle between him and a well-set Muhammad Shehzad (41 off 45).

Muhammad Shehzad (21*) and Abdul Faseeh (10*) look to set a solid platform for Pakistan, after the departure of Haseebullah.

The centurion in the previous game, Haseebullah, is sent packing, early, by pacer Bilal Sami for just two runs. The left-hander was surprised by the pace and bounce on that delivery.

Pakistan are 15/1 after three overs.

Muhammad Shehzad and Haseebullah Khan are opening the innings for Pakistan.

Conspiracy behind for not releasing the army’s investigation of BDR mutiny: Fakhrul
2022-02-25