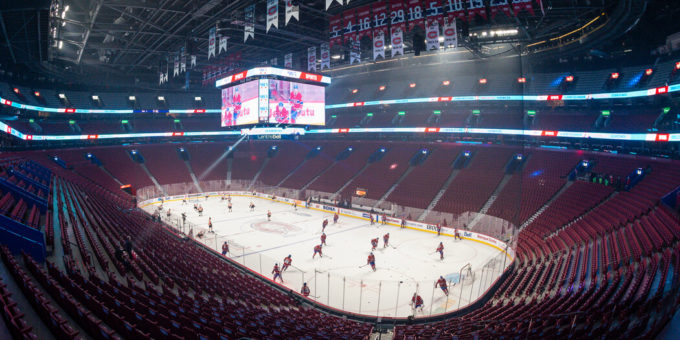 The National Hockey League and its players’ association have agreed to pause play until next week because of the coronavirus, becoming the first North American professional sports league to suspend games en masse amid the rapid rise of the Omicron variant.

The league said on Monday night that it would delay five games that were not already affected by postponements and begin its holiday break early.

Cases among players and their close contacts had already prompted delays to nearly four dozen N.H.L. games this season. Earlier Monday, several teams, including the Columbus Blue Jackets, Montreal Canadiens and Edmonton Oilers, said they planned to shut down activities before the holiday break.

N.H.L. officials, announcing an agreement with the players’ association, said that teams would return to practice on Dec. 26 and that the league planned to resume its schedule on Dec. 27.

The suspensions mean that 31 planned hockey games will not be played this week, though Dallas beat Minnesota on Monday night and two games scheduled for Tuesday — Washington at Philadelphia and Tampa Bay at Las Vegas — will still go ahead.

Several major sports leagues have postponed games and adjusted policies as they struggle to keep their seasons going amid the spread of the highly contagious Omicron variant. The N.H.L., which is considering whether to send players to the Winter Olympics in Beijing in February, on Sunday suspended travel between the United States and Canada for games, citing “the fluid nature of federal travel restrictions.” About 15 percent of the league’s 700-plus players were restricted by coronavirus protocols, The Associated Press reported on Monday.

The move by hockey’s leaders came as the National Football League was still completing a slate of games that had been scheduled for the weekend.

The N.F.L. and its players’ union also made changes to their testing protocols on Saturday for the fourth time in a week. Vaccinated N.F.L. players who do not show symptoms will receive “strategic and targeted” tests and players showing signs of Covid-19 will be tested “promptly.”

More than 40 N.F.L. players were added to the Covid-19 reserve list on Monday, meaning they had either tested positive or were deemed to have been in close contact with someone else who had.

On Sunday, the N.B.A. announced that it would postpone five games. Its players will be tested daily for two weeks starting Dec. 26.

England’s Premier League canceled nearly all of its soccer matches over the weekend because rosters were widely depleted by positive cases. The league said in a statement that it would keep its schedule “where safely possible,” even as clubs were told to return to their 2020 coronavirus protocols and players were urged to limit social contacts.

College football’s four-team playoff begins in less than two weeks, with its championship game set for Jan. 10. Bill Hancock, the executive director of the College Football Playoff, said last week that no changes had been made to the schedule and that the four playoff teams were still set to arrive at their venues. The semifinals are scheduled for Dec. 31 near Miami and Dallas, and the championship game for Jan. 10 in Indianapolis.

Some N.H.L. players, though eager to play in the Olympics for the first time since 2014, have expressed misgivings about the burdens of testing protocols and other rules at the Beijing Games.

“I’m very disappointed and it tough decision for me as it’s once in life time opportunity,” Robin Lehner, the goalie for the Vegas Golden Knights, said on Twitter. He had been hoping to play for Sweden.