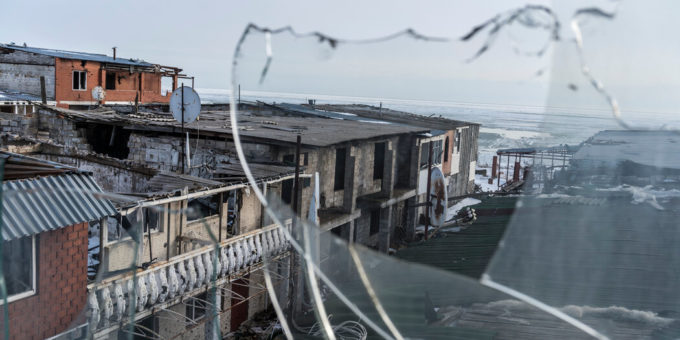 The threat is menacing and all around. To the north, south and east, Russian combat battalions, infantry divisions and airborne units continue to mass with a mighty arsenal that includes hundreds of tanks, armor and artillery.

To the west, NATO allies are reinforcing positions in Eastern Europe and the United States is warning that war could come any day. Ukraine’s own military high command is warning that Russia is in the final stages of readiness for military action should the Kremlin order it.

As world leaders and diplomats scramble, shuffling between Washington, Moscow and Ukraine’s capital, Kyiv, to avert a war that all agree could be catastrophic, the people living in the maelstrom are trying essentially to keep calm and carry on.

In images captured by photographers from The New York Times who have been traveling across Ukraine, civilians continue to keep to the daily rhythms of life.

Yet even as children celebrate birthdays and go sledding after a fresh snowfall, as people dance and drink and go about their business, reminders of the looming threat are getting harder to avoid.

The threat of Russian invasion is nothing new for the half a million people living in this industrial port city only about 30 miles from the Russian border. Since the conflict between Russian-backed separatists and Ukrainian forces broke out in 2014, rumors of impending invasion have become familiar background noise. Many people, like those skating in a park on a recent evening, have learned to live with the uncertainty.

A sign reading “I Love Mariupol” stands on a hill overlooking the Sea of Azov.

Feeding sea gulls by the ocean.

Even those who live close enough to hear the gunfire from the conflict in the country’s eastern frontier find moments of joy. Lena Rusnak, second from left, celebrating her 11th birthday at the home for disadvantaged children where she lives in Pionerske, about five miles from the frontline.

A Roman Catholic prayer service held by the Christian Rescue Service to pray for peace in Ukraine.

Oksana Zavadskyi, one of the founders of the Christian Rescue Service charity operations in Pionerske, looking at a display of war memorabilia at their church building.

The estimated 10,000 people living in this town — where in 2021 the Ukrainian government restored its founding name, New York, to distance it from its Soviet past — have struggled for survival as the smoldering trench war grinds on in Donetsk. A woman took food aid home from a social service organization.

The continuing conflict in eastern Ukraine has taken a heavy toll on the people here, and many have abandoned the village, especially the young. Those who remain live in difficult conditions close to the Russian separatist front lines.

The Soviets renamed the town Novhorodske in 1951, and its main industry for years has been a chemical plant that produces phenol, a disinfectant and chemical precursor with a variety of uses that is also highly toxic.

Karyna Kostyukova, 17, left, and Sofiya Rodyonova, 13, preparing for a performance at the Mariupol Puppet Theater.

Serhiy Vakula, left, and Mariia Boiko putting on a performance of “The Fox and the Bear” at the Mariupol Puppet Theater.

The Ukrainian capital is several hundred miles from the eastern front. It was here, at Independence Square, where tens of thousands rallied in 2013 and 2014 — part of a broad protest movement that ousted the pro-Russian president Viktor Yanukovych.

The toppling of the government was the pretext Russia used to seize Crimea and then back separatists rebels in Donetsk and Luhansk. Ukraine’s current leader, President Volodymyr Zelensky, has urged calm in the face of escalating tensions. After a recent snowfall, children went sledding on a hill outside the Presidential Administration Building.

Russian troops continue to mass on the border in neighboring Belarus, taking up positions that are just a 140-mile drive north of Kyiv. But residents continue go about their daily routines, like at this New Year’s market.

A river runs through this small village in southeastern Ukraine. On the east bank, the Donetsk People’s Republic, backed by Russia, has control. And on the western shores of the Kalmius River, the Ukrainian military holds the line.

From left, Olya Rud, Serhiy Chelkov, a neighbor, and Vera Karpenko, in Ms. Karpenko’s kitchen. In 2015 Ms. Karpenko’s husband was driving a tractor in a nearby field that he had been assured was clear of mines, but his tractor hit one and he was killed. Olya is her sister, and Serhiy is her current husband.

Volodymyr Voronov, 63, cleaning a cow barn about three miles from the front. Mr. Voronov was born in Russia but has lived in the area since he was 17.

Eric Karpenko, 11, playing a military video game at his house some three miles from the front.

The secessionist war that has consumed the eastern region of Ukraine colloquially known as Donbas has left the town of Svitlodarsk in a particularly vulnerable position. Its industrial infrastructure and waterworks have been a matter of dispute for years.

As Ukrainian soldiers watch and wait in icy trenches at a forward observation post nearby, a resident of Svitlodarsk pulls children through snowy streets on the sled.

A woman walks on a street in the vulnerable town of Svitlodarsk. The graffiti on the wall behind her reads, “Kiss me when we meet.”

While many people have tried to maintain a sense of stoic calm, reminders of war abound in the border regions. Concrete barriers and barbed wire line the beach along the Sea of Azov. Russia is on the other side of the water.

Cars destroyed during fighting in the area.

Vacation homes next to the beach lie in ruins after years of fighting.

Western leaders have warned that a full-scale invasion could lead to the most catastrophic violence in Europe in decades. Ukrainians, hardened by history and no stranger to threats from their giant neighbor Russia, have met the moment with a mix of apprehension and resolve.

How military action might start has become an anxious guessing game for Western and Ukrainian officials. In just one of myriad scenarios, hostilities could start with a naval clash in the Sea of Azov, where Ukrainian and Russian vessels operate in proximity.