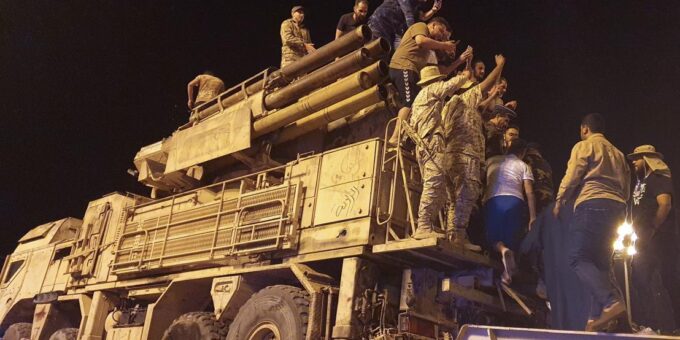 TRIPOLI: Forces backing Libya’s UN-recognized government said Monday that hundreds of Russian mercenaries fighting for rival military commander Khalifa Haftar had been evacuated from combat zones south of the capital Tripoli.
The claim comes after a series of setbacks for Haftar’s year-long offensive to seize the capital from the Tripoli-based Government of National Accord.
“An Antonov 32 military cargo plane landed at Bani Walid airport to resume the evacuation of Wagner (Group) mercenaries who had fled southern Tripoli, to an as-yet unconfirmed destination,” pro-GNA forces wrote on Twitter.
There was no immediate response by Haftar’s forces to the GNA’s claims on Monday.
Several countries including Russia and Turkey have been accused of involvement in the battle between the GNA and Haftar’s forces.
Last month, in a report sent to the Security Council, United Nations experts corroborated US media reports that the Wagner Group, a shadowy Russian paramilitary organization seen as close to President Vladimir Putin, had sent fighters to back Haftar.
The Kremlin has always denied involvement.
At a UN Security Council videoconference earlier this month, Britain and the United States urged Russia to stop sending mercenaries to Libya.
“Wagner Group activities continue to exacerbate the conflict and prolong the suffering of the Libyan people,” said British ambassador Jonathan Allen at that video meeting.
American ambassador Kelly Craft said that “all actors involved in the conflict in Libya must immediately suspend military operations.” Their Russian counterpart, Vasily Nebenzia, dismissed the claims as “speculation.”
Pro-GNA forces, with growing support from Turkey, have chalked up a series of victories in recent weeks largely thanks to their air superiority.
They said Saturday they had seized three barracks south of the capital, days after Haftar’s forces announced their fighters would pull back from some positions south of Tripoli.
Turkey has acknowledged sending fighters to support the GNA in Libya, but has not specified how many.
Pro-GNA forces said Monday some “1,500 to 1,600 mercenaries” had fled from the frontlines in Tripoli to Bani Walid, around 145 kilometers (90 miles) southeast of the capital.
They said the previous day seven cargo planes had landed at the town’s airport, bringing in munitions and weaponry and evacuating the fleeing fighters.
A video broadcast on the Tripoli-based Libya Al-Ahrar television channel showed armed men boarding an Antonov 23-type military cargo plane.
A Russian-made Pantsir air defense missile system could be seen in the background.
Haftar’s forces, who control much of eastern and southern Libya, have suffered a series of setbacks since April when GNA fighters ousted them from two strategic coastal cities.
Oil-rich Libya plunged into conflict after the ouster and killing of veteran dictator Muammar Qaddafi in a 2011 NATO-backed uprising, with rival administrations and militias vying for power.
The conflict worsened when Haftar’s forces launched their offensive on Tripoli last April.
But despite early successes for Haftar, the battle for the capital — which has left hundreds dead, including dozens of civilians, and displaced more than 200,000 people — quickly stalled on its outskirts.
Intermittent fighting continues. Early on Monday, Libyans awoke to explosions and rocket fire, as they marked the second day of the Muslim festival of Eid Al-Fitr.

Opinion | Why the Coronavirus Is Killing African Americans

Canada to face Belgium, Croatia and Morocco in group stage at World Cup in Qatar
2022-04-01