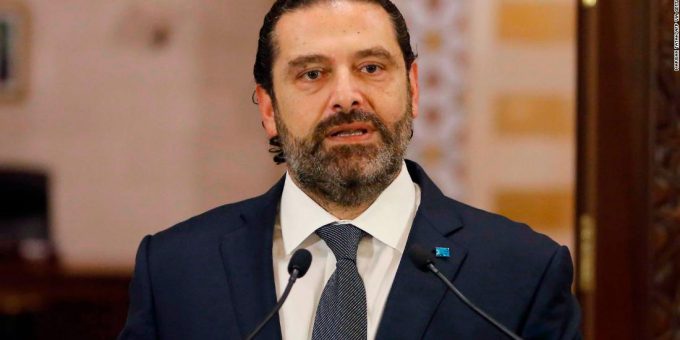 The three-time prime minister has led a national unity government, which included some of his political adversaries, for less than two years. In recent months, the country saw rapid economic deterioration, ballooning debt and rising prices.

On October 17, the government proposed imposing a tax on Whatsapp calls, along with other austerity measures, sparking nationwide protests that paralyzed the country.

Lebanon has been under lock-down since the protests began. Banks and schools have been closed for 12 days, while protesters blocked major routes throughout the tiny eastern Mediterranean nation.

“I can’t hide this from you. I have reached a dead-end,” Hariri said in his resignation speech.

“To all my political peers, our responsibility today is how to protect Lebanon and to uplift the economy,” he added. “Today, there is a serious opportunity and we should not waste it.”

Scores of protesters in downtown Beirut cheered as Hariri announced his departure. At their peak, hundreds of thousands of people took to the streets to protest government corruption on Sunday.

Over the last week, protests have dwindled in number, concentrating on road closures on the country’s main routes as the economic crisis has deepened.

Hariri’s announcement came hours after chaos broke out in downtown Beirut when a mob stormed into the capital’s main protest site, setting parts of it alight and tearing up tents on Tuesday afternoon.

Shouting “Shia, Shia” and singing chants in support of Hezbollah and Amal — another Lebanese political party — hundreds of men wielding sticks poured into the site, breaking up protest road closures and attacking demonstrators. Police fired dozens of rounds of tear gas to disperse the crowds.

The military was deployed to the streets of downtown Beirut on Tuesday, and many anti-government protesters have cleared the site. Earlier, female protesters tried to form a human chain trying to separate the demonstrators from the mobs.

Hezbollah’s media office could not be reached for comment.

Calls had grown in recent days for Hariri and his government to resign. The Prime Minister’s cabinet includes his political adversaries, including Hezbollah, the Iranian-backed Lebanese militant and political group.

Hezbollah chief Hassan Nasrallah last week said the protests were part of an international conspiracy aimed at toppling the group.