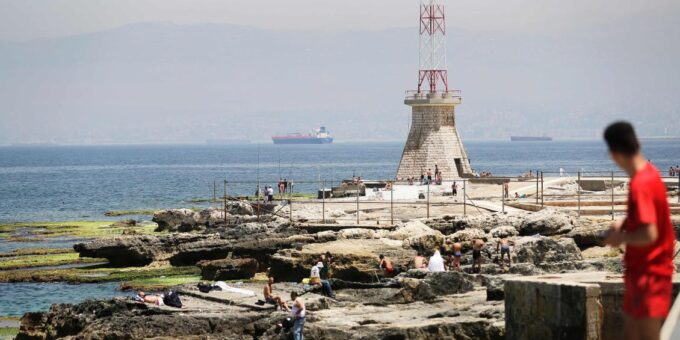 BEIRUT: Lebanese rushed to food stores to stock up on vegetables and basic items, hours before the government was to reinstate a four-day nationwide lockdown on Wednesday, following a spike in reported coronavirus cases.
The government called on the public to stay home, starting Wednesday evening and until dawn on Monday, reversing measures earlier this month that phased out restrictions imposed since mid-March.
The new shutdown is a rare reversal and comes as many countries, seeking to balance economic and health care needs, have started easing restrictions despite grave concerns of a setback.
Restaurants will close down after they partially opened 10 days ago, and food deliveries will be halted altogether. The country’s top Sunni Muslim cleric announced that communal Friday prayers in mosques will also be halted, only a week after they were allowed to resume at limited capacity.
The public health crisis comes at a particularly turbulent period for Lebanon. The country is facing an unprecedented economic and financial crisis, putting pressure on a population that is seeing its savings erode. The currency, pegged at a fixed rate to the dollar since 1997, has lost 60% of its value in a few weeks.
Unemployment had been rising even before the coronavirus restrictions as economic growth and investment dropped. Officials say 45% of the population now lives in poverty. The government has asked the International Monetary Fund for financial assistance, and talks over the rescue plan are due to begin with the IMF later Wednesday.
Lebanon began a phased-out plan to relax a national lockdown late last month that allowed small businesses to reopen, and shortened a nighttime curfew.
But after a few days of single-digit cases detected, there was a spike in reported infections this week, including among Lebanese returning home during repatriation programs who did not observe quarantine measures.
Lebanon, a country of just over 5 million, has so far been able to contain the virus, recording only 870 infections, including 117 repatriated Lebanese, and 26 deaths after imposing early lockdown measures and strictly implementing restriction on movement.
But over the last few days, government and health officials criticized carelessness and lax implementation of social distancing and other restrictions among the public, warning that the relaxation of restrictions would be reconsidered.
Meanwhile, Saudi Arabia said Wednesday it will go into a full lockdown during the days of celebration that follow the Muslim holy fasting month of Ramadan.
The Interior Ministry said the lockdown would be in effect from May 23 through May 27 — days mark the Eid Al-Fitr holiday that comes at the end of Ramadan. That holiday typically sees families invite loved ones over for meals and go out to eat and drink during the day.
And the United Arab Emirates, a federation of seven sheikhdoms, said it will offer free coronavirus testing for all citizens, beginning next week. Foreigners in the country with coronavirus symptoms, pregnant women, those over 50 and those in contact with those who fell ill with COVID-19 also will be among those able to be tested for free.
Private beaches at hotels also are beginning to reopen in Dubai, even as the number of confirmed cases and deaths continue to rise in the country.
In Tehran, mosques temporarily reopened Tuesday night after about two months closure, for a special night of prayers in Ramadan.
A mosque at Tehran university campus in central Tehran hosted worshippers for the “Qadr,” or ‘‘Night of Destiny,” a special night of prayers in the Muslim holy month.
Officials in Iran had closed down all mosques and holy sites across the country in mid-March, at the height of the coronavirus outbreak, to lower the risk of the contagion. The virus has killed more than 6,700 people and infected more than 110,000 people in Iran so far.
“Obviously, everyone is feeling great tonight. It has been a tough time especially for mosque-goers and those who love praying, ” said Reza Abbasi, a worshipper who was praying along with his family on the campus of Tehran university.
Upon entering the campus, a group of medical students disinfected hands and shoes of worshippers and gave away face masks. Worshippers also had their body temperatures taken by infrared thermometers. Spots were marked on the mosque floor for worshippers to sit down while practicing proper physical distancing.

Russia Covid 19 Vaccine: ‘This is all beyond stupid.’ Experts worry about Russia’s rushed vaccine | World News
2020-08-12