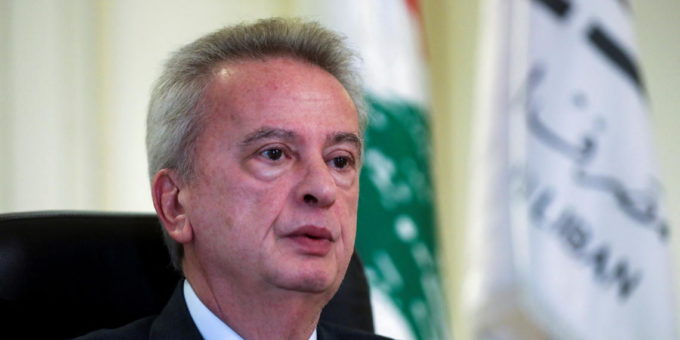 BEIRUT: Lebanon’s central bank said on Friday it aimed to boost the Lebanese pound’s value by easing restrictions on dollar purchases after the currency hit a record low, fueling fresh protests about rising prices and a collapsing economy.
The pound, which has lost more than 90 percent of its value since Lebanon’s financial crisis erupted in 2019, dropped beyond 33,000 to the dollar, though it had clawed back some ground to around 27,200 by Friday.
Before the crisis, which has driven a significant proportion of residents into poverty, it traded at 1,500 to the dollar.
In response to the sharp decline, the central bank said it was removing a ceiling related to bank purchases of dollars using the official Sayrafa exchange rate platform.
“This initiative aims at curbing the volatility of the exchange market and aims at strengthening the pound’s value against the dollar,” bank Governor Riad Salameh told Reuters,
.”..The operation consists of decreasing the amount of bank notes in Lebanese pounds.”
Salameh also said there had been “signs of manipulation of the prices of the dollar to the pound,” without giving details.
One analyst has described the central bank move as like taking “a Panadol pill to treat a major crisis,” saying the government needed a program of reforms to tackle deep economic problems.
Commercial banks have all but shut their doors to depositors amid a liquidity crunch caused by the economy crumbling under a mountain of state debt.
A new cabinet was formed in September, promising to start fixing the economy and restart talks with the International Monetary Fund, but ministers have not met for three months because of dispute over the conduct of an investigation into a huge explosion in Beirut port in 2020.
Salameh is facing multiple domestic and international investigations into his conduct at the head of the central bank, which he has led for three decades. He denies any wrongdoing.

Riad Salameh: In Lebanon, depositors’ money is still availableLebanon’s Salameh to sue Bloomberg after US denies talk of sanctioning him