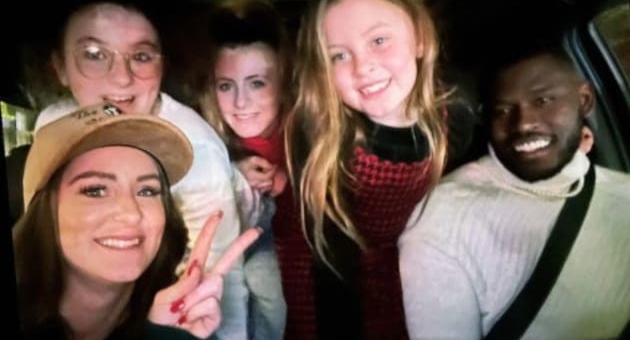 
There was a time when Teen Mom 2 fans looked at Leah as a walking cautionary tale.


Messer struggled with addiction and endured two bad divorces in her early years on the show.


But these days, the mother of three has turned things around in a major way.


Currently, Leah is dating Jaylan Mobley, and if her social media posts are any indication, the woman is head over heels.


The couple has only been together a few months, so they’re still experiencing a ton of new milestones together.


And it looks as though Leah and Jaylan are definitely making the most of their first Christmas together!


All this month, Leah has been documenting her holiday festivities, and of course, her three daughters — Ali and Aleeah, 12, and Adalynn, eight — have been joining in the fun.


Earlier this week, the merry band of five drove around Leah’s neighborhood checking out the Christmas lights.


Prior to this festive excursion, Leah, Jaylan, and the girls made a trip to a Christmas tree farm to pick out this year’s most important decoration.


Leah documented the occasion in her Instagram Stories, writing, “Let’s go get this Xmas tree” on the post.


“Look at Jay! He wants that one!” Aleeah remarked when Jaylan seized on a particular fir.


The fun continued on the ride home, with Mobley declaring:


Jaylan proceeded to grant nicknames to every passenger in the car, calling himself Santa Claus and Leah was Mrs. Claus.


(We’re sure that little quip will only bolster the rumors that Leah and Jaylan are secretly married.)


Aleeah was Cindy Lou Who, much to her apparent delight.


Jaylan saved Ali for last, naming her “the cutest Grinch.”


Ali objected to that particular moniker, and she registered her complaint with aplomb:


“I’m not a Grinch!” Aleeah’s twin sister remarked to the delight of her mother and siblings.


From there, Leah declared that it was time “to name the Christmas tree.”


The group went with “Bob,” which might not be the most creative name, but no one seemed worried about the outdoing each other in that department.


We’re sure Mobley was just messing around, and Bob will be just fine.


As for Leah — well, it looks as though she’ll be better than just fine.


There was a time when the bliss she’s experiencing these days would have seemed impossible — or at least very unlikely.


Messer is obviously incredibly happy in her relationship with Mobley, but more importantly, she seemed happy before he entered her life.


It’s wonderful to find someone who can brighten your life just by being a part of it.


But what’s even better is when you were already providing your own illumination — then the two of you can simply shine together!

Halle Bailey Cast as The Little Mermaid, Racists Flip Out on Twitter
2019-07-05

High cholesterol: Sign to not ignore while walking; may require immediate treatment
2022-08-25