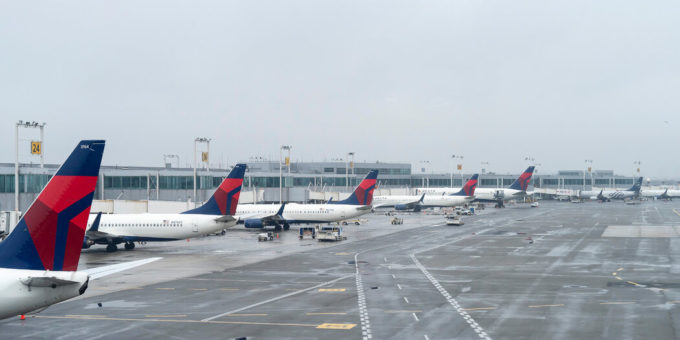 Verizon and AT&T said on Tuesday that they would delay the debut of new 5G cellular service near some airports, an attempt to address concerns that the technology would interfere with airplane equipment when the service started on Wednesday.

President Biden welcomed the companies’ decision, saying their actions would avoid the “potentially devastating disruptions” to air travel that airlines had warned about just a day earlier.

The announcements by the wireless companies came after the debut of 5G had been delayed multiple times. Aviation regulators and airlines repeatedly raised concerns about how the new service could interfere with safety equipment on planes, but the telecommunications industry has countered that regulators and airlines have had years to prepare.

It was not clear whether the changes AT&T and Verizon announced on Tuesday went far enough to avoid mass flight cancellations. Several airlines and their trade group did not immediately respond to requests for comment. A few foreign airlines canceled flights to the United States that were scheduled for Wednesday.

Early this month, the Federal Aviation Administration said it had reached a deal with AT&T and Verizon that included delaying the start of 5G service by two weeks and adding safeguards around airports. But that agreement proved to be premature when airline executives on Monday sent a letter to the administration claiming that the start of the service could cause such huge problems that the “nation’s commerce will grind to a halt.”

“This agreement protects flight safety and allows aviation operations to continue without significant disruption and will bring more high-speed internet options to millions of Americans,” Mr. Biden said in the statement. Federal officials will also continue to work with wireless carriers, airlines and aviation manufacturers to find a “permanent, workable solution,” he added.

Mr. Biden said that more than 90 percent of the planned 5G debut would proceed as scheduled.

AT&T said in a statement on Tuesday that it had “voluntarily agreed to temporarily defer turning on a limited number of towers around certain airport runways” while it continued to work with aviation regulators. Verizon said it would also go ahead with its Wednesday launch but would add some additional measures to address concerns around airports.

The announcements by AT&T and Verizon came after the executives of 10 airlines sent a letter to the transportation secretary, Pete Buttigieg, on Monday saying that they feared chaos at airports and cargo hubs because of restrictions put in place by aviation regulators to avoid interference between the new wireless service and plane equipment used during takeoffs and landings.

“Every one of the passenger and cargo carriers will be struggling to get people, shipments, planes and crews where they need to be,” the executives said. “To be blunt, the nation’s commerce will grind to a halt.”

On a day like Sunday, more than 1,100 flights would have been canceled because of the F.A.A. restrictions, affecting about 100,000 passengers, the group said.

The new 5G service uses so-called C-band frequencies, which are close to the portion of airwaves used by radio altimeters, devices that determine the distance between planes and the ground. That measurement is particularly important to pilots when visibility is limited.

Several major companies and Airlines for America, the industry trade organization that organized the letter, did not immediately provide estimates for how many flights could have been canceled on Wednesday if the 5G rollout happened as planned. In a separate statement on Monday, United Airlines estimated that the disruptions would affect 1.25 million United passengers and at least 15,000 flights annually.

The airline group offered a solution in the letter: Allow 5G to be put in place nationwide starting on Wednesday, except for within two miles of affected airport runways.

Several international airlines said on Tuesday that they would cancel or suspend flights to the United States on Wednesday because of the start of 5G service. Air India, said it would cancel flights from New Delhi to New York, San Francisco and Chicago and another from Mumbai to Newark. Emirates, which is based in Dubai, said it planned to suspend service to several U.S. airports. Japan Airlines and All Nippon Airways, also in Japan, said they would cancel or change the aircraft for some flights to and from the United States.

In a letter to staff on Tuesday, American’s chief operating officer, David Seymour, had warned of “major operational disruptions” caused by the 5G rollout because the potential for interference is not fully understood.

“To be very clear, we’re incredibly disappointed that we are at this point, that the entire U.S. airline industry is facing major disruption as new wireless technology is activated,” he said. “The two should be able to coexist, but that only comes with better understanding of potential impacts.”

The industry and the aviation regulators had raised concerns about 5G interference over the past several years. In November 2020, for example, the International Air Transport Association, a global trade group, warned that such interference could trigger automated systems forcing planes to pull up to avoid phantom objects, or could prevent planes from warning pilots of real obstacles.

Airlines and the F.A.A. began escalating warnings in recent months, leading Verizon and AT&T to delay their limited 5G rollout from December to early January and again to this Wednesday. The latest delay came after the F.A.A., which is part of Mr. Buttigieg’s department, reached an agreement at the start of January, buying more time to prepare safety precautions.

The F.A.A. said at the time that it would no longer ask for further delays after Verizon and AT&T agreed to the most recent postponement. At the time, Airlines for America said in a statement that it would “continue to work with all stakeholders to help ensure that new 5G service can coexist with aviation safely.”

The telecommunications industry has pushed back against the concerns raised by the airlines and the F.A.A., noting that the start of 5G has been years in the making and that the service has already been introduced in Britain, France and other countries, mostly without incident.

“In our opinion, the technical information that is being used to generate concern shows improbable worst-case scenarios,” GSMA, a global wireless industry group, said on Monday.

The F.A.A. has noted, however, that there are technical differences in how 5G is being carried out in other countries. In the United States, planes would be protected from 5G interference only in the last 20 seconds of flight, compared with 96 seconds in France, for example. The temporary power limits that U.S. wireless companies agreed to are still about 2.5 times higher than the permanent limits used in France, according to information the agency posted online. In the fall, the Canadian government announced that it would limit 5G service near most major airports.

Last week, the F.A.A. started issuing hundreds of notices to airlines with updated guidance on how to land planes safely in low-visibility conditions where 5G service is of concern. On Sunday, the agency said it had cleared an estimated 45 percent of the U.S. commercial plane fleet to perform such landings safely, opening up runways at as many as 48 of the 88 airports most directly affected by potential 5G interference. The agency did not identify which airports had yet to be cleared.

Lawmakers and safety experts have criticized the aviation regulator in recent years for failing to anticipate and prevent the problems that caused two fatal crashes of the Boeing 737 Max plane, killing 346 people and leading global aviation regulators to ban the plane for nearly two years.

The Federal Communications Commission, which regulates the wireless industry, did not immediately respond to a request for comment. Wireless providers have spent billions of dollars to access the airwaves for their new 5G service, reflecting how the next-generation network is central to their business ambitions.