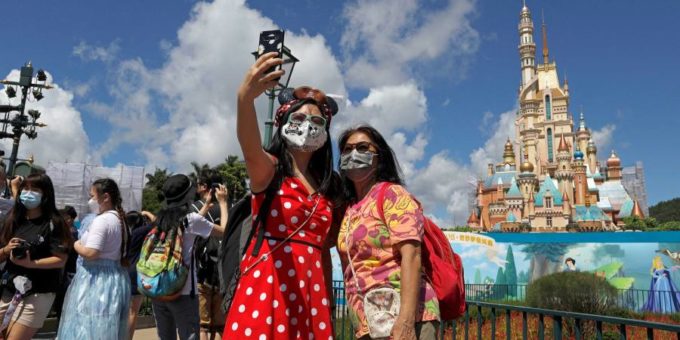 Exports rose 4.2 per cent in October month-on-month, a faster pace than the previous month’s 1 per cent increase in what analysts described as a strengthening of momentum.

Year-on-year, total trade expanded by 24 per cent in October, extending the 18.6 per cent growth in the preceding month, according to the country’s Department of Statistics.

October’s total exports rose by 22.7 per cent year-on-year, following the previous month’s 18.6 per cent growth, while total imports grew by 25.6 per cent after an 18.7 per cent expansion in September.

Trade picked up across the board with petrochemicals, non-domestic exports and re-exports all expanding on the month, data showed. “Momentum . . . strengthened as nominal exports picked up strongly,” said Priyanka Kishore, head of India and south-east Asia economics at Oxford Economics in Singapore.

Last month, Singapore relaxed one of the world’s most stringent pandemic regimes, launching quarantine-free travel arrangements with 10 countries after nearly 21 months of closed borders. Vaccinated people will be able to travel freely to and from eight countries including the UK, US, France, Italy, the Netherlands and Canada.

However, analysts said Singapore’s borders remain relatively closed. “We expect service imports to outpace service exports in the near term as domestic restrictions remain tighter than those abroad, especially in the US and Europe, which can lead to more outbound tourists,” Kishore said.

October’s export growth benefited from the low base recorded in 2020 while also getting a boost from petrochemical shipments. “Given the start-stop nature of the global recovery, the year-on-year changes remain volatile and susceptible to further swings in the months ahead,” said Nicholas Mapa, economist at ING in Manila.

“We will change the political culture of the country” : Gotabaya Rajapakse
2019-10-19

Amendments to PAYE tax with effect from January : Ministry of Finance
2019-12-25