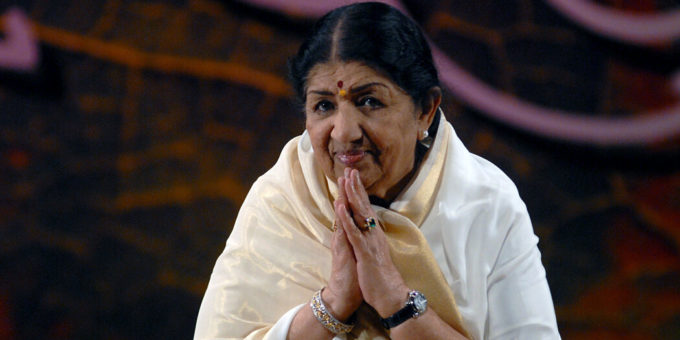 Lata Mangeshkar, a beloved Indian singer who enthralled generations of Bollywood audiences as the singing voice behind many actresses’ performances, died on Sunday at Breach Candy Hospital in Mumbai, India. She was 92.

She died of complications from Covid-19 after weeks of hospitalization, said Pratit Samdani, a doctor at the hospital, according to Indian news outlets. Prime Minister Narendra Modi said on Twitter that he was “anguished beyond words.”

Ms. Mangeshkar leaves a legacy of tens of thousands of songs, mostly in Hindi but also in several other Indian languages. Most of her work was as a playback singer — a vocalist who does not appear onscreen, but records a character’s songs, which are later dubbed in.

In India, though, she was far from anonymous. Her decades of work made her a revered figure. She received the Bharat Ratna, India’s highest honor, in 2001. The Ministry of Home Affairs said she would be given a state funeral, and that flags at government buildings would be flown at half-staff for two days.

Ms. Mangeshkar was known for her range — she could sing in four octaves — and her gift for singing in character, tailoring her voice and emotions to the actress she was voicing onscreen. She recorded some of Bollywood’s biggest hits, including “Pyaar Kiya To Darna Kya” (Why Fear to Be in Love) from the 1960 film “Mughal e-Azam.”

In that scene, a courtesan challenges an emperor in court by declaring her love for a prince. Dilip Kumar, who played the prince, called Ms. Mangeshkar’s voice “a miracle of nature’s creativity.”

As a teenager, in the 1940s, Ms. Mangeshkar played minor roles onscreen. “I never liked it — the makeup, the lights,” she said in an interview for a book published in 2009. “People ordering you about, say this dialogue, say that dialogue. I felt so uncomfortable.

“The day I started working as a playback singer, I prayed to God: ‘No more acting in films,’” she said. “He listened to me and I got a fairly good position in playback singing.”

She would become the singing voice for generations of actresses in the Hindi-language films of Bollywood, from Madhubala and Meena Kumari in the 1950s and 1960s to Kajol and Preity Zinta in the 1990s and 2000s. But she also worked on many films in other Indian languages, including Marathi, Bengali, Tamil, Kannada and Gujarati.

“If we play her songs one by one, we could hear her for a month and never hear the same song again,” Kajol said Sunday on Twitter. “Prolific and profound.”

Ms. Mangeshkar also had a career as a live performer, usually appearing onstage in an understated white or cream-colored sari. India’s first prime minister, Jawaharlal Nehru, was said to have been moved to tears by her rendering of a patriotic Hindi song, “Aye Mere Watan Ke Logon,” after India’s war with China in 1962.

“She leaves a void in our nation that cannot be filled,” Mr. Modi said Sunday on Twitter. Ms. Mangeshkar was an early supporter of Mr. Modi when he first ran for prime minister.

Lata Mangeshkar was born on Sept. 28, 1929, in the city of Indore, in what is now the state of Madhya Pradesh. She was the oldest of five children born to Shuddhamati Mangeshkar and her husband, Pandit Deenanath Mangeshkar, a well-known classical musician active in Marathi-language theater. Her sisters Meena, Asha and Usha and her brother Hridaynath, all of whom survive her, are also musicians.

The family was prosperous at first, living in a large house in the city of Sangli, in what is now the state of Maharashtra. Her father was her first music teacher, and she acted in a few plays as a child, though her father was reluctant to let his daughters appear onstage. Ms. Mangeshkar spent much of her childhood on the road, as the family accompanied her father’s theater company on tour across the region.

In the 2009 book, “Lata Mangeshkar … in Her Own Voice,” written by Nasreen Munni Kabeer, Ms. Mangeshkar said she gave up formal education on her first day of school. She had brought her 10-month-old sister Asha with her, and the teacher refused to allow the baby into the classroom, she said.

In the late 1930s, she said, the family fell on hard times after Mr. Mangeshkar produced several films that did badly. The theater company closed in 1940, and the Mangeshkars were forced to sell their large house and move to Pune. Lata began singing regularly, alongside her father, at classical music concerts, which became the family’s main source of income.

In 1942, when she was 13, her father died. To support the family, she joined the Navyug Chitrapat Film Company and began acting in Marathi- and Hindi-language films, playing minor roles and earning little. In 1945, the company moved its operations to what was then Bombay, and Ms. Mangeshkar’s family moved into a one-bedroom apartment.

Her fortunes began to change in 1947. In India, the era of the singing film star was coming to an end, and filmmakers had begun hiring professional singers to record the vocal parts. After Ms. Mangeshkar’s voice caught the attention of several film composers and directors, she began working as a playback singer.

In 1949 came her first hit: “Aayega Aanewala” (The One Who Is Meant to Return Will Come Back), from the movie “Mahal,” a ghost story that was also a breakthrough for the actress Madhubala. The song begins as the hero, played by Ashok Kumar, takes shelter from a storm and enters a dilapidated mansion. (Ironically, Madhubala is not onscreen when the song plays, though Ms. Mangeshkar provides the singing voice of her ghostly character in other scenes.)

When “Aayega Aanewala” was first released as a record, Ms. Mangeshkar’s name was nowhere to be seen on the label. But as it got radio airplay, listeners began calling to ask who the singer was. All India Radio, a public broadcaster, contacted the record company and announced Ms. Mangeshkar’s name on air, making her a star overnight.

Still, she said she spent the next few years working long hours under difficult conditions, recording after the day’s shoot had finished. Playback singers would make their recordings first, with the actors later lip-syncing to them on camera. Eventually, singers like Ms. Mangeshkar worked in studios, but in the early years they recorded on the film sets, which were usually dusty and hot. Fans couldn’t be turned on because of the noise they made.

“I recorded two songs in the morning, two in the afternoon, two in the evening and two at night,” she said in Ms. Kabeer’s book. “I left home in the morning and got back at 3 a.m. the next day and that’s when I ate. After a few hours of sleep, I would wake up at six, get dressed, catch the train and travel from one recording studio to another.”

Ms. Mangeshkar never married. For years, she supported her mother as well as her siblings, until they began their own careers. Her sister Asha Bhosle, 88, is also a well-known playback singer.

“Music is my life and God,” Ms. Mangeshkar said in Ms. Kabeer’s book. “My prayer is music — it is like a father and mother to me.”

Cash incentives for parties could help get more women in politics: MPs
2019-04-13