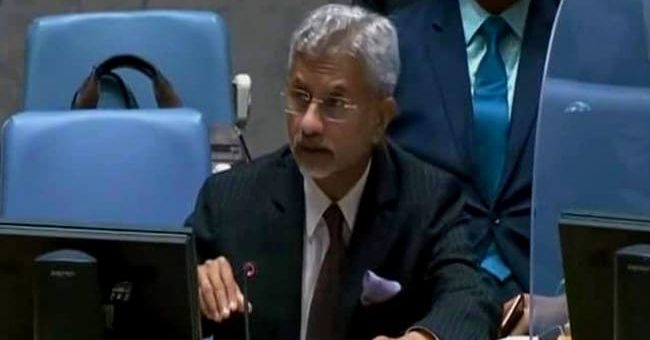 Foreign minister S Jaishankar detailed India’s concerns about terror for the first time since the Taliban takeover of Afghanistan, naming specific groups in another first. “Whether in Afghanistan or against India, groups like Lashkar-e Taiba and Jaish-e-Mohammed continue to operate with impunity and encouragement… Heightened activities of the proscribed Haqqani network justify growing anxiety,” he said in an address to the United Nations Security Council in New York.

“In our own immediate neighbourhood, ISIL-Khorasan (ISIL-K) has become more energetic and is constantly seeking to expand its footprint. Events unfolding in Afghanistan have naturally enhanced global concerns about their implications for both regional and international security,” he said during a briefing on ‘Threats to international peace and security caused by terrorist acts”.

“What is true of Covid is true of terrorism. No one is safe until all of us are safe… (But) Some countries undermine our collective resolve,” added the minister. Then in what appeared a dig at China, he continued, “When we see state hospitality being extended to those with blood on their hands, we must call out the doublespeak”.

On July 28, China’s Foreign Minister Wang Yi met a visiting Taliban delegation led by Mullah Abdul Ghani Baradar in Tianjin, extending legitimacy to the group that was known for its support to terror. The US had invaded Afghanistan in 2001 over Taliban’s support to Osama Bin Laden’s Al Qaida.

Afghanistan belongs to the Afghan people, and its future should be in the hands of its own people, Mr Yi had said at the meeting.

“The hasty withdrawal of the US and NATO troops from Afghanistan actually marks the failure of the U.S. policy toward Afghanistan. The Afghan people now have an important opportunity to achieve national stability and development,” the Chinese foreign ministry quoted him as saying.

The minister also said Taliban is an “important military and political force in Afghanistan and is expected to play an important role in the country’s peace, reconciliation and reconstruction process”.

China’s regional ally Pakistan has long backed Taliban. On Monday, a day after Taliban’s takeover of Kabul, Pakistan Prime Minister Imran Khan endorsed the group, saying they have broken the “shackles of slavery”.

Yesterday, asked how India views and deals with the Taliban leadership, Mr Jaishankar, without offering a direct comment, said it is still “early days”.

Asked if India has had any communication with Taliban recently, he said, “At this point of time, we are looking at the evolving situation in Kabul… as Taliban and its representatives have come to Kabul and I think we need to take it from there”.

Jason Momoa on Sweet Girl: It’s the hardest thing I’ve had to do to date