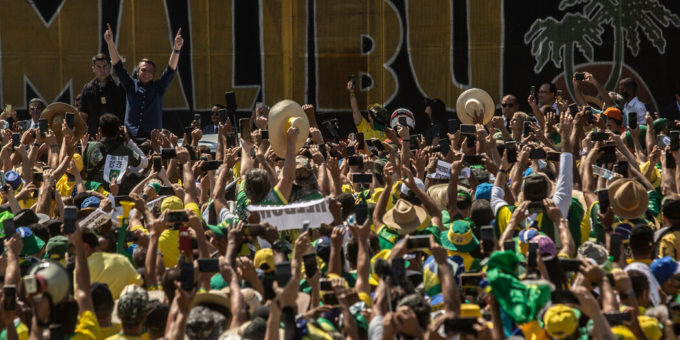 RIO DE JANEIRO — Beleaguered by declining poll numbers, a sputtering economy and judicial investigations, President Jair Bolsonaro called on his supporters to rally across the country on Tuesday, Brazil’s Independence Day, in a show of force critics fear could be a prelude to a power grab.

In recent days, the president has cast this moment as a do-or-die turning point for his political movement.

“I have three alternatives in the future: being arrested, getting killed or victory,” Mr. Bolsonaro told supporters last week, referring to next year’s presidential elections, which polls show he would lose in a landslide if the vote were held today. “You can be sure the first option, imprisonment, will not happen.”

Many in Brazil see in Mr. Bolsonaro’s actions a parallel to President Donald J. Trump’s in advance of the 2020 elections, and worry how Brazil, a country with weaker institutions, would weather a similar challenge to electoral institutions or an attack like the Jan. 6 riot in the U.S. capital.

A group of more than 150 heads of state, ministers and lawmakers from 26 nations issued a statement on Monday expressing concern that the rallies in Brazil had the potential to turn into an “insurrection” that could undermine democratic norms in the largest nation in Latin America.

“We are gravely concerned about the imminent threat to Brazil’s democratic institutions,” the statement said.

Mr. Bolsonaro has sought to portray Supreme Court justices and other powerful critics as underhanded villains who are setting the stage for the return of his political archrival, the leftist former President Luiz Inácio Lula da Silva, who has surged in the polls after the annulment of graft convictions and the restoration of his political rights.

In recent days, some of the president’s fiery supporters have called for the dissolution of the Supreme Court. Critics of Mr. Bolsonaro fear such rhetoric could lead to political violence, including attacks on the court in Brasília.

Speaking to supporters in Brasília on Tuesday, Mr. Bolsonaro railed against a justice of the court leading investigations that have ensnarled some of his allies and warned that if the court doesn’t shift course, “it may suffer that which we don’t want.”

Supporters who took to the streets dispensed with euphemisms, recasting the president’s vague threat in more specific terms.

“We need to shut down the court,” said Thays Peneiras, 48, who attended a rally in Rio de Janeiro, where she was selling masks with Mr. Bolsonaro’s image. “He wants to govern but the court won’t let him.”

The president’s base of support includes many members of the military police, a force that is nominally supposed to steer clear of politics. But a recent poll showed that three out of every 10 members of the force intended to take to the streets on Tuesday to support the president.

Mr. Bolsonaro has also called on supporters to take advantage of gun ownership regulations he has loosened to protect themselves in the coming months.

He has led one of the world’s most chaotic responses to the coronavirus pandemic, which has killed more than 584,000 people in Brazil. Unemployment, hunger, inflation, interest rates and inequality have all increased on his watch. Making things worse, an intense drought has reduced water levels at hydroelectric stations, which has the country teetering on the brink of power outages.

The Supreme Court has opened several investigations that have eroded the public’s confidence in Mr. Bolsonaro and his government. They include inquiries into a vaccine procurement corruption scandal and the president’s quest to discredit Brazil’s voting system.

This constellation of challenges has turned much of the electorate against Mr. Bolsonaro, who has railed against polls showing he would lose next year’s presidential election by a large margin to several possible rivals. The president’s attacks on institutions and the voting system could lead to a democratic rupture or a period of deeper instability, opposition leaders say.

“The country is going through its worst moment since the dictatorship,” the governor of São Paulo, João Doria, a presidential hopeful, said Monday. “There can’t be room for flirtation with authoritarianism.”

The president’s surrogates said Tuesday’s rallies would be a peaceful show of the popular will.

“This is a party of democracy!” Damares Alves, the minister of human rights, family and women said in a post on Instagram, in which she was beaming while greeting protesters who began congregating in Brasília on Monday. “Good citizens, peaceful citizens are arriving.”

Alessandro Molon, an opposition leader in Congress, said he worries that the president, by encouraging large and volatile demonstrations, is seeking to showcase the kind of grass roots support he would have in the event he were to challenge an electoral defeat or disregard the authority of critics in Congress and the judiciary.

“His base is languishing, but it is made up by an increasingly radicalized group, which he intends to use to falsely present as a mandate from the majority of the people,” Mr. Molon said.

Mr. Bolsonaro’s supporters flooded a seafront road along Copacabana beach, in Rio de Janeiro, on Tuesday. In the largely unmasked sea of protesters, some drank beer while chanting that Mr. da Silva deserves to go back to jail.

“I am certain that the thief would only win if there is fraud,” said Waldarcy Braga, 46, an electrician. Mr. Braga said he believes the Brazilian press, industry leaders and members of the judiciary are conspiring to sabotage Mr. Bolsonaro. “But politics are about mobilizing people, and look around.”

During a tense day in the capital, Jason Miller, the former senior adviser to President Donald J. Trump, said he had been detained at the airport in Brasília for three hours as he was preparing to leave the country after a conference of conservative leaders.

The O Globo newspaper reported that investigators from Brazil’s federal police sought to question Mr. Miller as part of an investigation into online disinformation campaigns targeting democratic institutions. Mr. Miller, who formed a new social media platform for conservatives, said in a statement that he and his traveling party “informed them we had nothing to say and were eventually released to fly back to the United States.”

He added: “Our goal of sharing free speech around the world continues!”

“There is no reason to add more instability, with events such as tomorrow’s demonstration,” he said.

London Film Festival welcomes audiences back to the movies