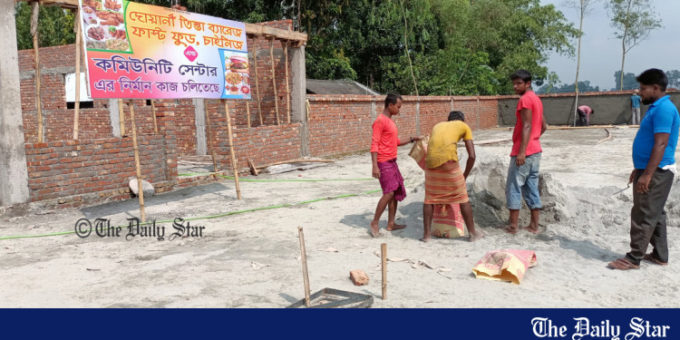 A written complaint has been lodged against local Awami League leader Abu Bakkar Siddique Shyamol for constructing a structure illegally on land belonging to Bangladesh Water Development Board (BWDB) — beside the Teesta Barrage bypass road — in Lalmonirhat’s Hatibandha upazila.

The BWDB authorities lodged the written complaint with Hatibandha Police Station and also sent a notice to Shyamol, asking him to stop the construction on the government land at Doani point, our Lalmonirhat correspondent reports.

Although the complaint was filed on September 1, police are yet to take any action, said Abdur Rab, Dalia Water Development Board’s Assistant Customs Officer.

He said, “We have informed the matter to the higher authorities.”

“If the structure is built on this government land, it will affect the operation of Teesta Barrage bypass road. We have taken preparation to remove the illegal structure through the district administration,” he added.

Contacted, Shyamol told our correspondent that he bought the land from its owner and has been building the structure following proper rules. But he did not give any details about the land owner.

“The complaint and the notice sent by BWDB is illegal,” he added.

He further said, “I will not remove the structure until any instruction comes from the court.”

Hatibandha Police Station Officer-in-Charge Ershadul Alam said, “The accused was asked to show legal documents and stop the construction but he did not respond yet.

Police will assist the BWDB authorities if any assistance is sought, he added.

Kareena Kapoor Khan snapped out and about in the city

Coronavirus in Hollywood: Jennifer Aniston Pens A Message Of Hope For Fans
2020-03-18