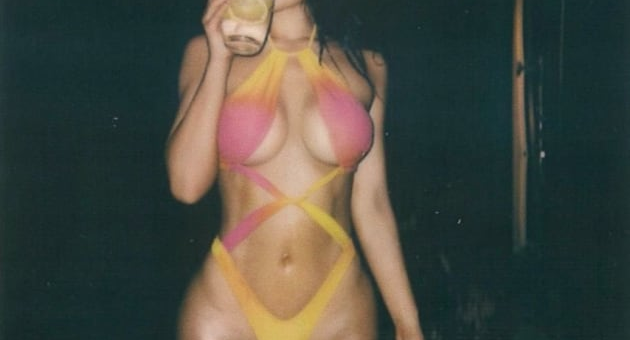 Last year, Kylie Jenner’s quarantine content served as one of the only highlights of what we then thought of as The Pandemic Year.


Now that it looks as though we’re in for a sequel (working title, Pandemic 2: The Legend of Curly’s Gold) it seems that Kylie has decided to bless the peasants of Instagram with more swimwear selfies.


And this time, the bikini posts are more compelling than ever for a couple of reasons:


For one thing, Kylie is launching a line of swimwear, which means some of the looks she’s rocking are of her own design.


On top of that, Kylie is showing more cleavage than ever before, and we’ve been told that’s something that people on the internet tend to enjoy.


The cosmetics mogul posted the pseudo-Polaroid below earlier today, and needless to say, it’s already received quite a response from fans.


In addition to being Kylie’s latest post, it’s also the first one to appear on the Instagram page for Kylie Swim, which is already boasting 300,000 followers.


Not bad for a page that’s existed for a few hours.


Clearly, Kylie knows a thing or two about promotions.


(Some might be inclined to point out that Kylie has been stripped of her billionaire status, and while the decision remains controversial, the important thing is that she’s really, really rich.)


Kylie’s latest project didn’t come as much of a surprise to her followers.


In fact, she’s been teasing her new line for several months now, and some fans have expressed disappointment that the launch didn’t take place until late August, a time when swim season is wrapping up for much of the country.


But hey, she’s a busy billionaire, and she clearly didn’t want to release her product until she had attained a certain level of quality.


“Working on @kylieswim and i can’t wait to share,” Kylizzle wrote in her Instagram Stories just last week.


Now, it seems the design portion of the project is complete, but it’s not yet clear when and where you’ll be able to purchase one of these items.


We’re guessing potential buyers would like a bit more information, especially if they live someplace where the leaves will be changing colors in a couple of weeks.


But hey, maybe you can be the first of your friends to rock a Kylie suit on Memorial Day of 2022.


We’ll probably still be wearing masks at that point, but maybe Kylie will come out with a line of N95s, too!


Whatever the case, Kylie is looking fiercer than ever in the first official glimpse of her long-awaited swimwear collection.


Will this be the project that finally gets her back into the ten-figures club?


We doubt the matter is keeping Kylie up nights, especially since she can afford to sleep on a giant pile of money, or a polar bear, or whatever it is that the mega-rich do at night.

Photos: Shraddha Kapoor’s day out at the salon