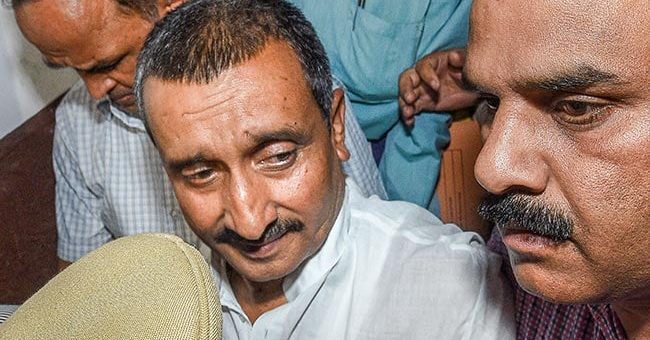 Kuldeep Sengar, a four-time BJP MLA from Unnao district, was expelled from the party in August 2019.

Expelled BJP MLA Kuldeep Singh Sengar has been sentenced to 10 years in prison for murdering the father of a teen girl he raped in Uttar Pradesh’s Unnao in 2017. His brother and co-accused, Atul Sengar, has been handed a similar term. A Delhi court also ordered the brothers to pay Rs 10 lakh each to the family of the Unnao rape survivor.

“The victim lost her father. She can’t return to her home. There are four kids in the family… three of them are girls…all four are minors,” District Judge Dharmesh Sharma said this morning while delivering the judgment in Delhi.

The court handed down a similar sentence for two policemen who had been charged with criminal conspiracy for falsely implicating the father in an Arms Act case; the cops were out on bail.

Kuldeep Singh Sengar has been “sentenced to undergo imprisonment for the remainder of his natural biological life” in the Unnao rape case, as per the sentence handed down in December last year.

He had also been ordered to pay Rs 30 lakh to the family of the rape survivor.

In August last year the court had framed charges against Kuldeep Singh Sengar and the others for assaulting the girl’s father and framing him in an Arms Act case. A country-made pistol was planted on him and he was beaten up at the police station, the judge said.

It was “part of a larger conspiracy to deter, silence and prevent the father from pursuing the complaint” in the rape case, the court added, pointing out his body bore 18 severe injuries.

The judge said that even though Kuldeep Sengar was in Delhi at the time, he was in touch with cops in Unnao. The father was picked up from a road, taken to a police station and beaten up, he added.

The rape case, which made international headlines, came under the scanner when the girl – after running from pillar to post for justice – tried to commit suicide outside Uttar Pradesh Chief Minister Yogi Adityanath’s home.

The next day, her father died while in custody at a local hospital. The 55-year-old had been arrested after complaint of illegal arms possession.

He had been admitted to a hospital hours before his death with complaints of stomach pains. At the time, his face bore multiple bruise and lacerations. A postmortem report said he died due to blood poisoning from a perforated intestine. It also listed 14 bruises all over his body.

During the routine medical check-up before he went to jail – conducted at the same hospital — he named Atul Sengar as his attacker.

Rhea Chakraborty has not approached any court for anticipatory bail and is ready for arrest, says her lawyer : Bollywood News
2020-09-07