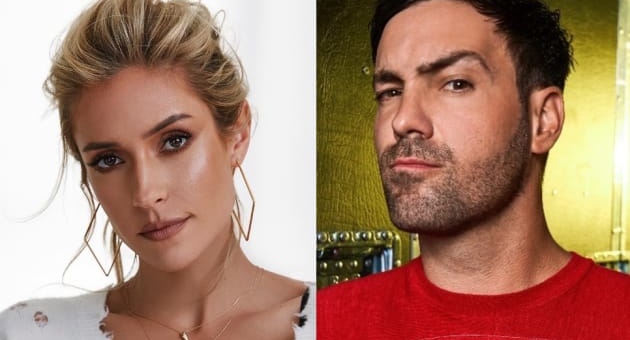 It wasn’t until last month that Kristin Cavallari broke her silence on her divorce from Jay Cutler.


Now she is moving on, and was spotted packing on the PDA with a handsome comedian.


Jeff Dye is 37 years old and a seasoned stand-up comedian.


Over the years, he has appeared on multiple MTV comedy shows.


Additionally, he was a finalist on Last Comic Standing.


On the down side, Jeff recently served as a guest panelist on the I-still-can’t-believe-this-exists singing competition, The Masked Singer.


He seems like a fine choice for Kristin Cavallari’s first stab at a (public) relationship.


It has been six months since she separated from her estranged husband, Jay Cutler.


How do we know that these two are on “friendly” terms? They were spotted.


Specifically, Kristin and Jeff were observed making out over the weekend.


The steamy PDA took place in the Fulton Market area of Chicago, which is a bar and restaurant district.


TMZ got their hands on a video of the hot thirty-somethings.


They were also the ones to identify Jeff Dye as Kristin’s partner in crime, so to speak.


He’s famous in the sense that he has a Wikipedia page, but not so famous that his identity didn’t need to be confirmed.


Now, an inside source dishes to Entertainment Tonight that “Kristin is having fun.”


We should certainly hope so! If you’re making out with somebody and not having fun, you either need to pick someone else or get a quick tutorial.


“And,” the insider continues, Kristin “is enjoying getting back into the dating scene.”


“Kristin and Jay were together for a decade,” the source notes.


“And,” the insider continues, the two of them “broke up several months ago.”


With that in mind, the source reasons, Kristin is taking her time “so she’s not rushing anything.”


“Kristin and Jeff were having a fun time,” the insider reiterates.


“But,” the source adds, “nothing too serious right now.”


Making out is often a very casual thing! Unless you’re, like, 14, but Kristin and Jeff are both grown adults and likely have a sense of perspective.


Now, so far, neither Kristin nor Jeff have addressed reports on their snogfest, confirmed their relationship, or gone Instagram official in any way, shape, or form.


But it’s not really a surprise to see that Kristin is ready to move on from her ex.


In fact, just days ago, she revealed to the world that she is actively taking steps to drop “Cutler” from her name.


“Now Kristin,” Ryan Seacrest recently told her during an interview, “I just want you to know that your name on the Zoom should be changed.”


He pointed out to her: “It says Kristin Cutler on my screen.”


“Oh my God, I didn’t even notice that! Wow!” Kristin admitted. That is very understandable.


Kristin went on to share that, “technically,” her name is still Kristin Cutler.


“[I’m] working on that,” she informed him. Name changes are very involved processes.

When an Ariel vintage motorcycle was gifted to Ranveer Singh