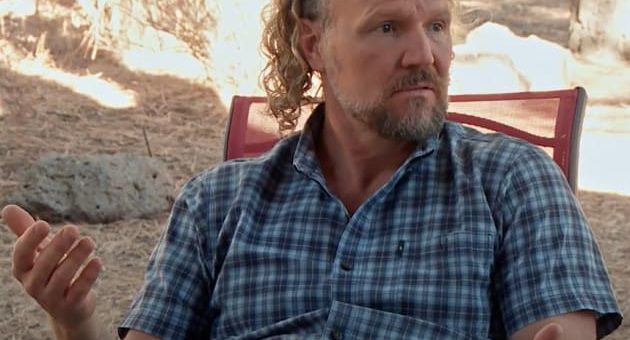 Kody Brown isn’t just out of money these days.


He’s also running out of patience.


On this Sunday’s brand new episode of Sister Wives, which was filmed just over a year ago, the father of 19 mostly berates his spouses over their reaction to his VERY strict Covid-19 rules and regulations.


As has been documented previously on Season 16, Kody is desperate to make sure he doesn’t get infected by this virus because he goes around from one home to another.


If he’s gonna continue to do this… Kody insists that Meri, Christine, Robyn and Janelle respect the protocols he has put in place.


He simply won’t spend time with them amid the pandemic.


In a sneak peek obtained by People Magazine from the upcoming installment, we see Kody and his sister wives gather (while socially-distanced) and we see the women react to Kody’s rundown of his various rules.


“Yeah, I mean some of these are great, but clean mail with alcohol wipes?” she adds.


“I’m looking at these rules and I’m astounded.”


As a few examples, Kody asks for the ladies to wear masks in public, sanitize and wash hands and disinfect groceries.


“Kids can see friends if maintaining 10-foot social distance and only for limited times… Clean mail with alcohol wipes.”


In this same confessional, Janelle refers to the strict list of protocols as the “10 billion commandments of Kody.”


“You can mock it or you can find a way,” Kody simply replies.


He then sounds off like an insensitive jacka$$ in a subsequent confessional of his own, telling the camera of his better halves:


“Are you too lazy to do a few chores? All these are is little chores.”


Christine, who announced her split frrom Kody in early November, doesn’t see it that way, however.


“I don’t think these rules are realistic, at all, for real-world,” she remarks on air.


But Robyn, with whom Kody spends a bulk of his time, says she’ll do almost whatever it takes to be with her husband.


The rules are not “hard to follow – if it means having Kody in my home,” she says.


Elsewhere in the footage, Christine asks, seemingly of Robyn:


“So, if we follow these rules in my house, we’ll be able to get together for Christmas Day?”


“Are you the head of the family?” Kody interrupts, directing the question toward Robyn and adding in anger:


“It’s pissing me off. They’re looking to Robyn for some kind of approval. I don’t have a head wife in this family. Now, I’ve had women try to be.”


This reaction prompts Robyn to break in a confessional, saying it’s “so ridiculous” for anyone to think she was the mastermind behind Kody’s rules.


“I know Kody’s like this. He’s not gonna have a wife come in and try to tell him what to do,” she explains, adding, “He’s just not.”


During a discussion with Janelle, he says that he’s “not going to negotiate” with their kids on whether or not they abide by the family’s COVID-19 rules.


“You’re either in and you’re complying with our standard,” he says. “Or I’m not coming around.”


On a recent episode, the family patriarch whined and complained over his sister wives having any opinions of their own.


“Plural marriage is a struggle. It’s a hard thing,” the guy actually said on air.


“And that’s not the deal we made when we got married.”

Actors Hrithik Roshan and Samantha Lockwood meet up in Mumbai

Arjun Kapoor and Anshula Kapoor pen emotional notes for sister Janhvi Kapoor on her birthday: ‘I know I wasn’t around…’
2022-03-06