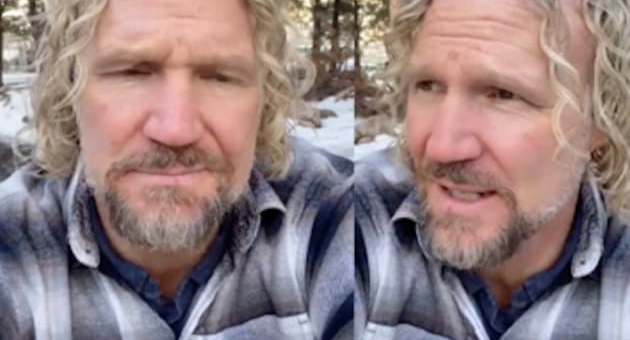 As has been well documented throughout Season 16 of Sister Wives, Kody Brown acts like a selfish jacka$$ in front of the camera.


The TLC camera, that is.


Get the father of 18 in front of his own cell phone camera, however, and he apparently becomes very self-aware, sensitive and, dare we even say it… likable.


Let’s just consider his latest Cameo, shall we?


For some reason, a fan of Kody’s paid $99 this week in exchange for the Sister Wives star to record a video in her honor on the aforementioned social media platform.


Referencing the VERY strict rules he put in place over a year ago in the face of a deadly pandemic, Kody actually admitted in this footage that he’s been “struggling.”


“I don’t even know what to say about [COVID] anymore,” Kody says in the video.


“I think that my cure has been worse than the disease. That’s just a personal thing… I’m second-guessing myself, which I probably shouldn’t do at this point.”


Over the past couple episodes, viewers have seen how Kody’s four spouses have reacted to his list of COVID guidelines.


They’ve included the requirement that everyone change clothes after shopping and sanitize all items before taking them into a house.


And if the Sister Wives do not follow these rules?


They aren’t allowed to spend time with Kody. It was as simple as that in late 2020, when all these Season 16 installments were filmed.


“It’s been a long two years, this whole thing, almost two years,” Kody continues in his latest Cameo, adding as a message to the person who ordered the clip:


One can’t blame Kody too much for taking every safety precaution possible, but even Janelle will tell him to f–k off on this Sunday’s episode of the reality show.


Meanwhile, on another Cameo filmed this week*, Kody attempted to give a newlywed some advice on marriage.


“I don’t know what to tell you about marriage,” admits the polygamist, who just watched one wife, Christine, leave him in early November.


“Ummm…be sincere, be loyal, and talk. You’ve got to talk about every little issue. Don’t let any little issue go unheard. The best marriages are the ones that talk.”


This is pretty ironic, of course.


He also said he has a crappy relationship with Christine.


So, a word of advice forr anyone thinkingg of spending $99 to heed any words of so-called wisdom from Kody Brown?


Go ahead and take that money…


That really is the equivalent to asking for Kody’s advice on, well, anything at all. The guy is a complete moron.

Five arrested over rape in Uttara