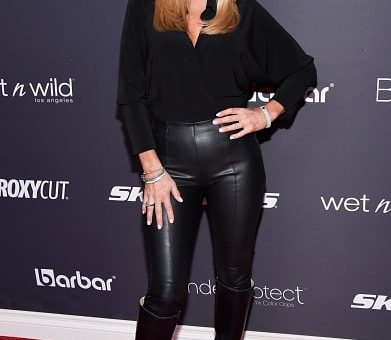 Kim Richards is ready to win back her housewife title.


It’s been four years since she was fired from The Real Housewives of Beverly Hills following her boozy breakdown and arrest for kicking a cop.


But now, Radar Online has learned that she is “in talks” to return to the show as a full-time cast member.


“Kim has been begging producers to take her back ever since she was fired,” a source close to the 54-year-old said.


Richards, who is one of the OG stars of the franchise, stopped filming the show years back to deal with her substance abuse issues.


As fans know, following Kim’s removal in June 2015, the sister of current cast member Kyle Richards has successfully maintained her sobriety and is ready for her big return!


Kim has made a few appearances on the RHOBH in a guest role for the past several seasons and even made up with co-star Lisa Rinna.


“Kim has been hanging on as a friend of the housewives,” shared the source.


The insider added that the “producers for the show know that Kim can bring in the ratings because she has done it before. But only when she is a mess.”


“Now that she seems to have it together, people are skeptical if their fans will care about her boring life.”


However, Kim is not giving up that easily and is ready to do just about anything to get her spot back on the show.


“Kim told them that she knows how to make people tune in and that she will deliver the drama,” the insider said.


“If it takes another meltdown she is ready to do that.


“At this point, she will do just about anything to be back on the cast full-time.”


And after longtime castmember and Bravo sweetheart Lisa Vanderpump recently quit the series, we know there is a serious chance for a new addition.


“I think [my castmembers] made it pretty impossible for me to go back frankly,” Lisa told Daily Mail on June 4 when asked about her return on next season.


On June 6 the famous restaurateur opened up more about her decision to leave RHOBH during an interview with Us Weekly.


“I made the decision to leave,” she said. “It was a very difficult year for me, personally and professionally.


“I had wonderful things happen this year, opening up TomTom and the cocktail garden in Vegas,” she explained.


“The Housewives, it’s just, it’s emotionally too difficult to deal with.”


However, just yesterday, Real Housewives executive producer, Andy Cohen, shut down the rumors that he was actively considering Kim, as well as her and Kyle’s sister, Kathy Hilton, to join the cast.


But we’re sure Cohen will be having some pressing conversations with the Housewife hopefuls very soon.


And as for icon LVP, no one can ever replace her — but the show must go on!

Salman Khan to begin work on Sher Khan after wrapping up Inshallah?