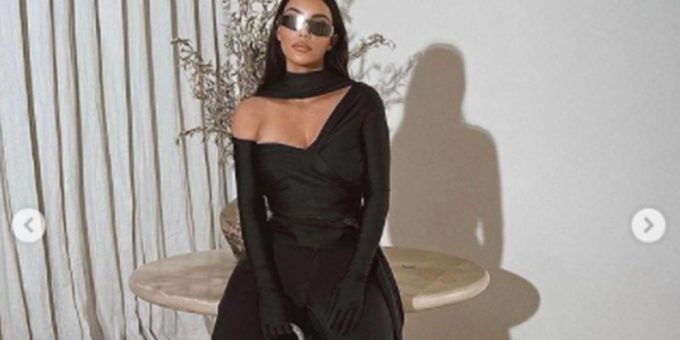 Kim Kardashian has done it again! The reality TV star seems to be going through some kind of a Balenciaga hangover, for she was spotted once again wearing a leather ensemble that covered her from head to toe. And she still managed to make a bold statement in true Kim K style.

Check out the pictures here.

The 40-year-old Keeping Up with the Kardashians star was clicked stepping out of a black SUV wearing the daring outfit, which was essentially a black trench coat that went with black gloves, black pants and matching stiletto boots. She chose to wear the Balenciaga as she made her way to New York City ahead of the Met Gala.

What was most striking, was the fact that the festish outfit had covered her face entirely with a face mask that had two little chain openings for her eyes. Kardashian wore her hair in a long ponytail.

In her post, the SKIMS founder tagged Balenciaga designer Demna Gvasalia, and captioned it with a knife emoji.

Last month, too, she had decided on eccentric fashion, wearing a black bondage-inspired Balenciaga bodysuit, as she had arrived at estranged husband Kanye West’s second Donda listening event.

It was a full-body black nylon bodysuit, which had a face mask, too, with openings around her eyes and mouth. She completed her look with a long braided ponytail and knee-high boots.

“Yummy Yummy In My Tummy,” Says Bipasha Basu As She Relishes A Delectable Feast