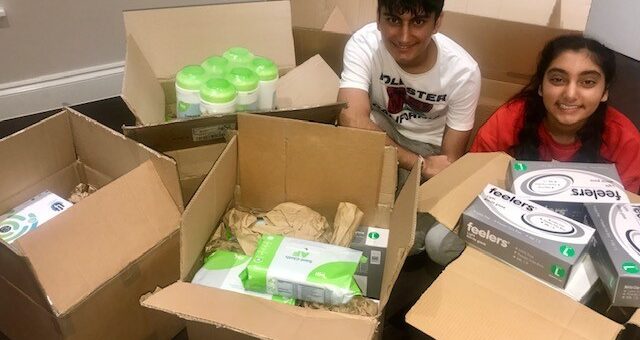 Two children of a frontline worker took part in a bike ride to raise more than £4,000 for NHS staff.

Shiv and Siya Dawda, 16 and 14 respectively, from Watford, decided to cycle for six and a half hours on April 25 in the empty grounds of Merchant Taylors’ School in Northwood to fundraise for NHS workers.

The funding for personal protective equipment is important movement for the two children, as their mother works at Northwick Park Hospital in Harrow.

However, they say their determination in raising the money grew when their grandfather was struck down with suspected Covid-19 symptoms and became extremely unwell.

Their grandfather was being looked after at a care home and the family were told his condition was “not looking good”.

Mr Dawda said: “It was extremely difficult as we were unable to hold his hand or be by his side, but we tried to cheer him up waving at him outside the window of his care home.

“Thankfully, he is recovering well now.”

The determined pair were also inspired to raise money as they watched their mother come home from late-working shifts and disinfecting in the shower immediately.

Both kids are also hoping to buy even more PPE as hospitals continue to work and defeat the virus.

Mr Dawda said: “At this challenging time, we have been overwhelmed by the support of local businesses who have kindly donated vouchers and Watford Football Club who have donated signed memorabilia which we plan to auction online to continue raising funds.”

Do donate and support the fundraiser, visit the JustGiving page here. You can also follow their progress on Twitter @nhs_help.

Check out the latest on The Inner-West roads

Teacher Dies After Fight With Vendors Over Headphone Price In Delhi, 2 Arrested
2019-08-27