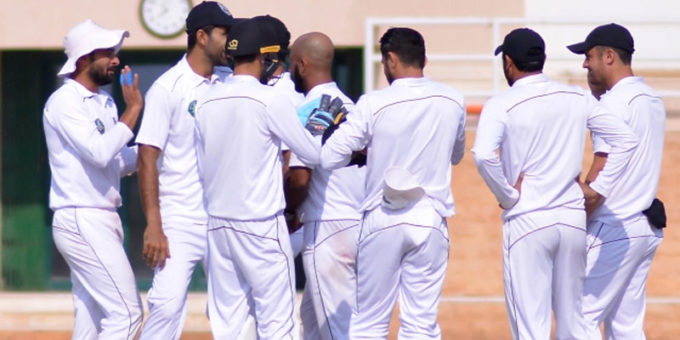 Khyber Pakhtunkhwa and Northern registered victories in their Quaid-e-Azam Trophy round nine fixtures on Thursday.

Central Punjab suffered their first defeat of the tournament as they were handed a 211-run thrashing by Khyber Pakhtunkhwa in Karachi.

Things did not improve for Ahmed Shehzad’s side who started day three at 13-4 while chasing 325. There was no resistance by the batting side which were eventually bowled for 113 with Umar Akmal top scoring with 43.

Meanwhile, Northern notched up an eight-wicket win over Balochistan in Karachi.

Balochistan, who started the fourth day’s proceeding at 189-8, were dismissed for 233 as Nauman Ali returned with figures of 5-75.

In chase of 192, Northern had a bad start as they lost Umar Amin with four on the board but Zeeshan Malik and Ali Sarfraz got together to put on a 70-run stand for the second wicket.

Ali Sarfraz (95 off 87) and Faizan Riaz (52 off 43) then ensured there were no hiccups in the run chase as they both scored half-centuries and put on an unbeaten 118-run partnership to guide the side home.

On the other hand, the fixture between Sindh and Southern Punjab ended in a stalemate.

Southern Punjab were batting at 236-5 when the stumps were drawn. The side were struggling at 47-3 when Abdul Rehman Muzammil and Sohaib Maqsood took the reins and scored 138 runs together for the fourth wicket.

Abdul Rehman Muzammil was the show stealer for Bilawal Bhatti’s side as he remained unbeaten on 103 with 14 boundaries and two maximums to his name. Maqsood, on the other hand, went on to score 76 with the help of 11 fours and three sixes.

Communal Tension Are A Thing Of Past In Gujarat, Says Chief Minister

Yo Yo Honey Singh : Block Party | Live Performance in Dubai 2019