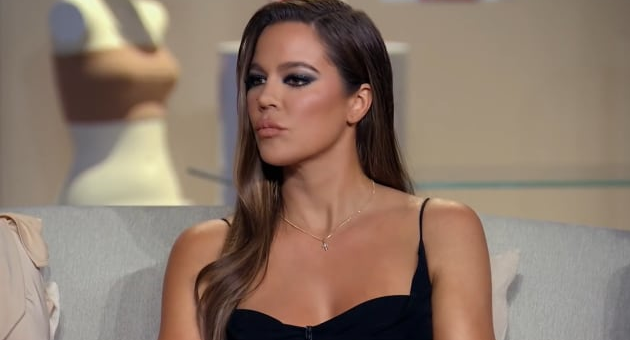 Keeping Up With The Kardashians is ending with a Reunion-style sit-down interview.


There, Andy Cohen asks the Kardashians some hard questions, as teased in a new promo.


Khloe is of course grilled about her cheating baby daddy, Tristan Thompson.


As you can see in the teaser, Khloe’s face is a stony mask of displeasure.


In the teaser, Andy Cohen doesn’t hold back when he asks questions of the Kardashians.


“When Tristan first cheated on you, how did you know it would be done again?”he asks.


Khloe’s discomfort with the question is palpable.


We do not get to learn Khloe’s verbal reaction — not yet, anyway.


The Reunion-style sit-down talk will begin airing on Thursday, June 17.


In early April of 2018, Khloe Kardashian was very, very pregnant with True.


Tristan Thompson was the baby daddy.


She was overjoyed to welcome her first child with the man she loves.


Then, multiple reports came out, one after the other.


Tristan had been spotted with multiple women who were not Khloe.


There were photos and videos. His cheating story was blown wide open.


Previously, there had been muttering about when exactly Tristan began dating Khloe.


True is not his first child.


It appeared that his previous baby mama was unpleasantly surprised when he began dating Khloe.


However, there was no ambiguity here. Tristan cheated.


The day after this news broke, Khloe went into labor with True.


Despite everything, she insisted upon letting Tristan be in the delivery room — grim foreshadowing of what was to come.


Sure enough, Khloe — for reasons that the world has never truly understood — slowly but surely let Tristan back into her life.


Some of it may have been her own complicated feelings about her parents’ divorce.


There are children of divorce who become fixated on the idea of not “doing that” to their children, no matter what.


She convinced her family to accept Tristan back among them, despite their obvious feelings towards him.


Soon enough, Khloe was pretending that nothing had ever happened.


Late that year, it was already reported that Tristan was seen spending time with young, attractive women.


There were no “smoking gun” photos or videos this time, which may be why Khloe was able to ignore it.


What she was not able to ignore was the report that Tristan was allegedly seen “hooking up” with Jordyn Woods at a party.


Of course, Jordyn very adamantly denied that this happened.


She described in detail how that night went — and ended with Tristan giving her an uninvited kiss.


Regardless, Khloe was not interested in Jordyn’s version of events.


Having already decided for herself what to believe, she unleshed her fury on Kylie’s bestie.


Speaking of Kylie, that friendship was shattered. Jordyn had to move out of Kylie’s house.


Meanwhile, Tristan was once away able to worm his way back into Khloe’s good graces.


Always interesting when someone seems so much angrier at a (much younger) “other woman” than at the actual cheater.


Naturally, the illusion that Tristan was now being totally faithful to Khloe could not last forever.


In early 2021, she came forward with a story that she had had an affair with Tristan.


She described his penis, gave dates, and swore that he had assured her that he was single.


It is unclear exactly how much of this Khloe will address at the Reunion.


After all, though these things generally take all day to film, she is just one of the stars.


An itemized list of Tristan’s wrongdoings and an explanation of why she wanted to move past them could fill that time all by herself.


But it will be interesting to hear Khloe get — hopefully — grilled by Andy, instead of just saying exactly what she wants to her sisters.


Will there be any staggering revelations? Probably not.


But fans are so confused as to why anyone, let alone Khloe, would torment herself like this.