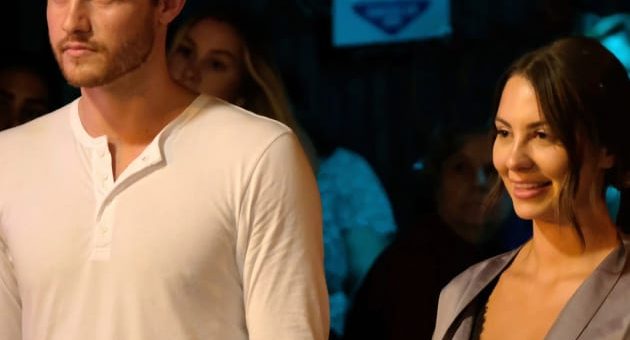 By now, you’ve heard the sad news that Peter Weber and Madison Prewett have broken up.


Maybe you read the news here, or perhaps you heard the sounds of the epic dance party that Peter’s mom is throwing in her backyard at this very moment.


Either way, it’s the end of an era — an era that lasted about 48 hours, but an era nonetheless!


With Madison out of the picture, and Peter’s wandering peter once again free to fly the friendly skies, rumors began to circulate that Weber had become romantically involved with one of the other contestants from his season.


Don’t worry, it’s not Hannah Ann Sluss — she made it perfectly clear that she won’t be boarding that flight again anytime soon.


No, this time around, fans are convinced that Peter is dating Kelley Flanagan.


In fact, some have even gone so far as to suggest that Kelley is pregnant with Peter’s baby, which would explain her absence during the Women Tell All episode.


Obviously, Kelley dispelled that myth by attending the live finale on Tuesday.


And now, she’s speaking out regarding the rumor that she and Pilot Pete have been secretly hooking up for the past several months.


In case there was any confusion, she proceeded to repeat her point several more times.


As for why she was in attendance at the finale, Kelley says the answer is simple — the show invited her, and she accepted.


“I got to experience something that, I didn’t know how it worked. I was like, well I’ll sit in the stands and figure out what’s going on here too, like, let’s see how all this happens,” she explained.


“It was kind of hard to hear at times so I didn’t really like hear too much of it because the speakers weren’t the best. Um, but it was dramatic.”


“You know what, at the end of the day, all of these interviews that I’ve been doing I said I think it’s best for Peter to take some time to be by himself and figure out what he’s doing, reflect on everything that’s going on and just figure out what he wants,” she added.


“And if him and Madi work out, good luck to both of them and I wish them the best.”


Well, we guess some of Kelley’s comments didn’t age well in the 24 hours since she made them.


Asked about the controversy over Barbara Weber’s obvious contempt for Madison, Kelley revealed she has nothing but good things to say about Peter’s mom.


“Barb loves me, I guess I’m her favorite. I learned that last night at the finale. She came up to me and told me, gave me the biggest hug and she was, she was so sweet to me,” Kelley shared of their finale encounter.


“I can’t hate her when someone’s so nice to me,” Flanagan added.


“Yeah she gave me a big hug, she’s like, ‘You’re beautiful, I love you, oh my God, I was your fan since night one!’ Barb I guess wants to get lunch with me and go shopping and hey, whatever, you know.”


That’s nice, but don’t flatter yourself too much, Kell.


We’re pretty sure Barbara’s favorite is “anyone who’s not Madison.”

Eight most instagrammable spots in Singapore for your #OOTD, Lifestyle, Travel News
2019-12-10