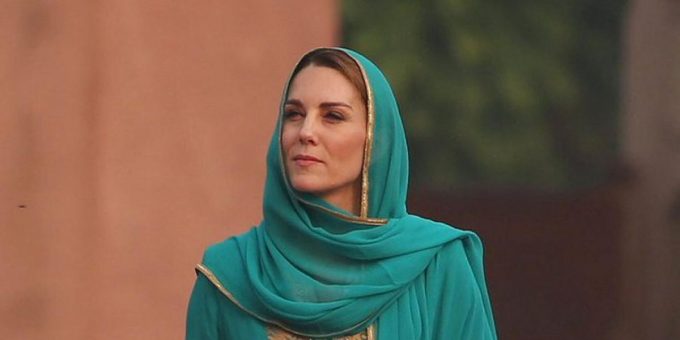 Prince William and Kate Middleton’s visit to Pakistan is still afresh in the memories of the people of Pakistan. It was not all about just a royal couple visiting a country undergoing some difficulties. It was about the exchange of love from both sides. Prince William has been trained since his childhood to be diplomatic and visit different cultures. However, more than prince William it was Kate Middleton the Duchess of Cambridge who won everyone’s hearts. With a smile gracing the Duchess of Cambridge’s face all the time, she paid her respect to Pakistani culture through her dressing as well. Kate Middleton wore Pakistani designers and carried every look with elan and grace.

Maheen Khan is currently in the UK to attend and participate in Pakistan fashion Week London. Here in an interview with BBC Asian Network, Maheen Khan revealed that she would start the fashion show with a tribute to Kate Middleton the Duchess of Cambridge who wore Pakistani dress with such elan and grace. She said, ‘I have five girls wearing similar outfits that I made for the princess, One of them (the periwinkle blue) I have repeated for you to see.’

Kate Middleton is known for influencing the fashion business in  anumber of different ways, Whatever she wears sells out on the websites in no time.  Maheen khan also spoke about a similar experience. Laughing away at the growing sales, she said that the number of orders she was getting online was crazy. However, the designer did not replicate the outfit for the clients who wanted to wear the same design and made some changes.

According to Maheen Khan, Pakistan had been known in the past for all the negative reasons. Art and culture could be the major tools to promote the positive side of Pakistan.

Britain was among the first few countries where the Asians settled outside their countries. There are many people who have been living there for generations and now the new generations have the fashion sensibilities that combine both conservative and Western fashion. In Maheen Khan’s view, the British market was important for her as there were many Asians living in Britain. Maheen Khan believed that conservative fashion could also be immensely trendy.

Guneet Monga writes an EMOTIONAL letter ahead of her wedding, “I have found my Raj!” : Bollywood News
2022-12-05