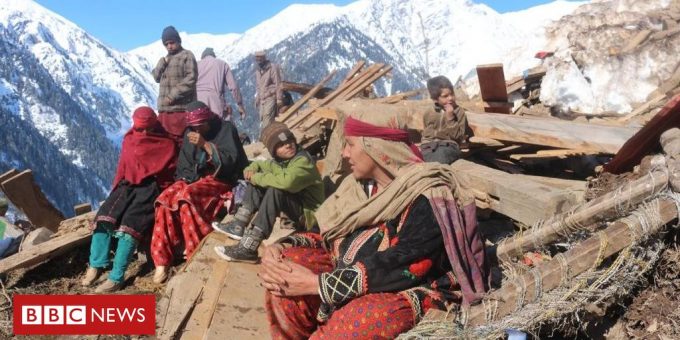 “There was nothing but horrible signs of death under the snow,” Shakila recalls. “My 11-month-old daughter was on one side of me, and the dead body of my sister-in-law on the other.”

Shakila’s village, Surgun, was the worst hit in a series of deadly avalanches which killed more than 75 people in the Neelum valley in Pakistani-administered Kashmir in January. Dozens of others were injured and hundreds lost their homes. It was the remote valley’s heaviest snowfall in a century.

Shakila spent more than six hours buried under snow – there was little warning the avalanche was coming.

“It was loud, like sudden thunder. I was sitting with my daughter in the open courtyard with a toy torch in my hand,” she told BBC Urdu.

“My mother-in-law was inside with grandchildren; my sisters-in-law were busy doing house chores while children were playing. Nearby, my father-in-law was busy collecting wood. Suddenly, with a gust of wind, a huge heap of snow covered everything in sight.”

Shakila was buried, along with her daughter Muqadas.

“Initially I couldn’t work out what had happened, or if I was alive or not. I kept screaming, calling people to get me out. For an hour or so, I could also hear my other family members doing the same.

“Everyone was screaming. Children were crying. My parents-in-law were reciting verses from the Koran. But then gradually it all went quiet,” says the 32-year-old.

She is being treated for multiple fractures in both her legs and her spine at a hospital in Muzaffarabad, the main city in Pakistan-administered Kashmir, about 100km (65 miles) away from Surgun.

It took rescuers up to three days to reach some of the villages hit by the avalanches in the Neelum valley, which lies next to the Line of Control, the de facto border dividing disputed Kashmir between Pakistan and India. By that time, most of the dead had already been buried and people were waiting with their injured relatives for helicopters.

Most of those killed in the avalanche that hit the village of Surgun were women and children. The weather forces children to stay at home at this time of year and schools were shut for the winter holiday.

Shakila says it was like being “in a grave” under the snow.

Then she started hearing people above – but they couldn’t hear her, or work out where she was. “Gradually I was suffocating. I knew I wouldn’t survive.”

“It had turned dark. The electricity had already been cut off in the village. I felt like I’d spent ages under the avalanche but I couldn’t move. My legs were pressed hard against a piece of wood.

“I thought my daughter was lying unconscious next to me but I didn’t dare touch her, fearing the slightest movement might harm her. Everyone had gone silent by then. There was no sound. I also stopped screaming and weeping and knew I would die at any moment.”

At that point, she says, she stopped feeling cold or pain.

“I started thinking about my parents, and whether they were alive. I thought about my village – was it all gone?

“And I thought about my husband who was in Karachi. How would he know about us all? All these memories and thoughts were going round in my head.”

It was then she remembered the toy torch she and Muqadas had been playing with when the avalanche struck. It was still next to her. She turned it on, and pointed it upwards.

“In the pitch dark, the torch light made its way through the snow, signalling to the villagers who pulled us out of the rubble.”

Shakila lost consciousness at that point.

“When I came round, I was being put on an army helicopter. I asked about my daughter. Everyone told me she was asleep.

“The next day when my husband Amjad visited me in hospital after arriving from Karachi, he had already buried his parents, nephews and nieces.

“He told me then that Muqadas was no longer with us.”

In all, Shakila lost 11 members of her family.

Amjad, who works as a driver in Karachi at the other end of Pakistan, headed home as soon as he heard about the avalanches. He got as far as the nearest town to Surgun, but then spent 22 hours walking the last part of the journey because there was so much snow that roads to the villages were closed.

There’s been more snow since the avalanche and many locals are now camping in freezing conditions, surviving on government rations. Rescue operations are over now all the dead have been buried, although one body is still missing.

Amjad and Shakila, who have no other children, had only recently moved to the village. With Muqadas gone, Shakila says she won’t go back – the memories are too traumatic.

“I shall leave that village where my family was destroyed and I will never return.”

Maya Ali And Sheheryar Munawar Pairing Up For Upcoming Project

Former Actress Testifies in Graphic Detail How Weinstein Raped Her