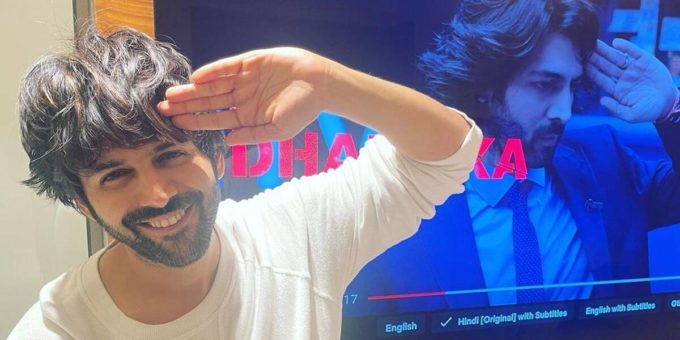 Actor Kartik Aaryan says he can never be a news reporter in real life. “I don’t know how to balance my personal and professional life because you’re always on your toes. I have gotten that immense respect for journalism,” he exclusively told indianexpress.com. Kartik plays the role of a news anchor in his latest release Dhamaka which is streaming on Netflix. The actor, who is getting a lot of appreciation for his performance, is also celebrating his birthday today.

Kartik’s Arjun Pathak is caught between a call with an unknown bomber who demands him to do certain things, and the race for ratings for his channel. In the midst, he also sports grey shades as an ambitious man who can go to any length to climb the ladder of success, manipulate and put emotions at stake.

Calling it his most challenging role till date, Kartik gave a credit to director Ram Madhvani for holding him through the difficult scenes. “A lot was happening on set and it was something which would drain you as an actor, but there was Ram Madhvani sir who was always there,” he said.

Ram Madhvani, known for directing award-winning Neerja and the recent hit web series Aarya, is teaming up with Kartik for the first time. Dhamaka was shot in around 10 days during the pandemic with limited crew. The director, known for his unique style of filming in a multi-camera set-up, used at least eight cameras this time. Kartik revealed it was a “conscious decision” to work with Ram Madhvani.

“I wanted to be a part of his world, the way he shoots, his vision. I’m glad I got to be that person about whom Ram Madhvani would think of how he should be and what he should do, how he’d present him. It’s a dream come true and I enjoyed every bit of it.”

So what has he learned from Ram Madhvani’s working style? Addressing him as a “professional and a team player” Kartik lauded his director for speaking highly of his team, given any situation or crisis. “He looked after his team and me being a part of it also. That speaks volumes about him. As he says, he hosts shoots. He’s a very good host so it’s like a celebration when you’re shooting with him. I’m glad that we got to spend so much time with each other.”

Known for highly commercial films like the Pyaar Ka Punchnama series, Love Aaj Kal, Luka Chuppi and Pati Patni Aur Woh, the actor seems to be trying to break away from the mould with Dhamaka. But as Kartik celebrates his 31st birthday, he doesn’t call it ‘Kartik 2.0’, “but it’s been a conscious decision to do good scripts. We made an edge of seat thriller which people are raving about, which is great,” he said.

Dhamaka also happens to be Kartik’s first release on the OTT. He called it the “right film at the right time” due to the global reach the streaming platforms have. He added that the future is co-existence of theatres and digital medium.