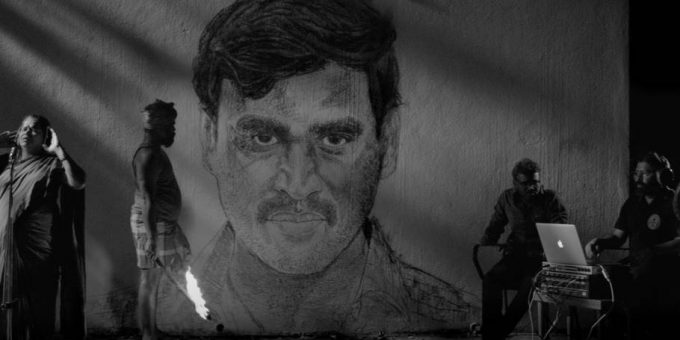 Karnan opens with a scene of a girl who is not more than 10, suffering a fatal seizure in the middle of a road. Nobody comes to her rescue and she stops moving after a while. As she lies there quietly, you can see an oncoming bus, whose driver seems to be unaware of the girl lying on the road, or so you think. And you know in a bit she will directly come under the wheels of the bus. You watch the scene with horror as it finally happens. The bus runs over her, and then another. It happens over and over again as no one stops to help the little girl. The girl on the main road is a metaphor. Like a street dog, she is left alone on the road as if her young life has no value. The heavy emotions that the opening scene evokes in you will only grow stronger as you come to see how a community of people are dehumanised.

It is pointless to discuss the plot of Karnan. It is unfair to measure this film in terms of story and whether you agree with the logic of the narration. This film needs to be experienced emotionally and visually. It is an approximation of generations of sufferings of people, who have been subjected to unspeakable atrocities owing to where they belong in the caste hierarchy. For example, standing up for one’s self-respect is suicidal. Demanding basic human rights is akin to asking for death for an entire village.

A high-level cop bays for the blood simply because his pride was hurt when the village head refuses to remove the towel around his head. He also did not like the fact that the men in the village did not bow in front of him and looked him in the eye. He is not worried about vandalism committed by the villagers. He would have let it slide, only if the villagers prostrated themselves before him. We read and watch news about caste-based violence and move on with our comfortable lives. But, Karnan will not allow you to do that. This film will pull you in and make you experience what a heavily persecuted community goes through. It is even hard to imagine that people in real life endured and still endure such tragedies not very far from us.

Director Mari Selvaraj’s Karnan is a revolutionary, unlike Pariyerum Perumal, he doesn’t take insults lying down. Karnan is fearless and he hits back when needed much to our satisfaction. We see Dhanush’s Karnan bursting in a fit of rage and attacking public property. But, you don’t feel anger at him for destroying properties funded by taxpayers. Instead, you understand his rage and see the meaninglessness of the existence of such properties, which actually doesn’t help the needy. What they do is they add more pomp to an already inflated pride of people in power, giving them a superiority complex to mistreat the less privileged.

Karnan is also cinematically wonderful. Theni Eswar’s cinematography mythologizes the struggles of villagers and their saviour Karnan. The film has many wonderful images that will have a profound impact on you. And Santhosh Narayanan’s score, especially the picturization of Kandaa Vara Sollunga, is a beauty to behold.

Dhanush leaves behind his stardom and has embraced the unglamorous features of his character with a lot of conviction. He has delivered a realized performance as an angry young man, who can no longer sacrifice his self-respect simply to stay alive. Lal, Rajisha Vijayan, Lakshmi Priyaa Chandramouli, Yogi Babu, Gouri G. Kishan, all young children, all old people, module dogs, the horse and even a donkey will make an impression on you.

Minister Babul Supriyo, Other Big-Hitters In Round 4 Of Polls Today