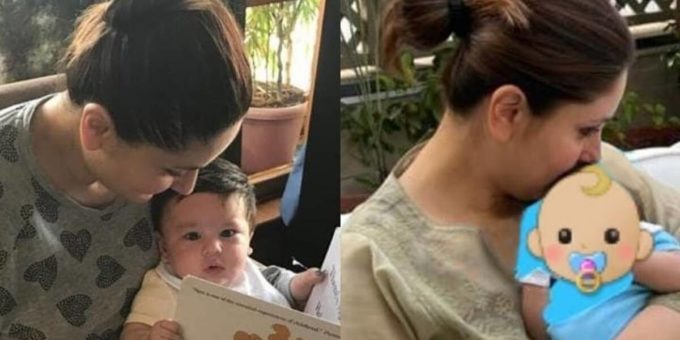 Kareena Kapoor’s son Taimur has been the centre of attention ever since his birth, and now his newborn brother Jeh is in the limelight as well. Both Kareena and Saif Ali Khan have made their discomfort about this frenzy quite clear, on several occasions. In a recent interview, the Veere Di Wedding actor opened up about making a “conscious decision” to keep her second son Jeh out of the media glare and wants her children to get the space to grow without each activity being documented.

Kareena who recently reacted on Jeh’s name controversy and trolling, is yet to share a picture of the baby. She doesn’t plan to post clearer photos anytime soon, either and said, “Not sharing many pictures of baby Jeh on social media to protect him from the constant pressure of being in the limelight. It is a bit of conscious decision because I think the fact that there was so much media frenzy on Taimur and his name and generally everything about him, so this time around, just need a little bit of breather.”

She added, “At the end of the day, they are kids, they need to have their space, they need to have their time. And I don’t want anybody to be so interested in them. They should be allowed their space to grow, not this constant pressure of being in the limelight. And that’s why we have taken this decision for Jeh,” The 40-year-old actor said in an interview with NDTV.

Kareena also mentioned that her elder son Taimur is very fond of his baby brother and is protective about him. She said, “He is overwhelmed and thrilled. We were worried at first that if he would be slightly jealous or that slightly feeling of, like there is someone new in the house. But you know, Taimur is so wonderful that he is actually protective about him now. When one or two of his friends come over now, he is like, ‘Have you seen my brother? Have you seen him, have you said hello to him?’ This is the way he asks his friends.”

Kareena added that whenever she and Saif Ali Khan tease Taimur about going on a holiday without his baby brother, he simply says, “No, not without Jeh.” “He is protective, he has got that older brother vibe. In that sense, it just worked out perfectly fine. There was never that insecurity and I think me and Saif also balanced it out a little bit,” she said.

Kareena recently launched her book, Kareena Kapoor Khan’s Pregnancy Bible. The Good Newwz actor, in her book, has opened up about her experiences during pregnancy and what she has learnt through her experience of motherhood with Taimur and Jeh. The introduction of the book, written by Kareena, has been released and it talks about the actor trying to balance it all – her work commitments, motherhood. She also expressed gratitude for all the help she gets from her own mother, Babita, and her domestic staff.

On the work front, Kareena will next be seen in Laal Singh Chaddha alongside Aamir Khan. The film is an official adaptation of Tom Hanks’ Forrest Gump. She also recently announced that she is bankrolling a project with Hansal Mehta and Ekta Kapoor.

The Jab We Met actor shared that she is interested in working on the OTT platform and has “read a lot of scripts” but is still looking for the right one.

Safeguarding in our mosques and Madressas: What you should know
2019-10-28