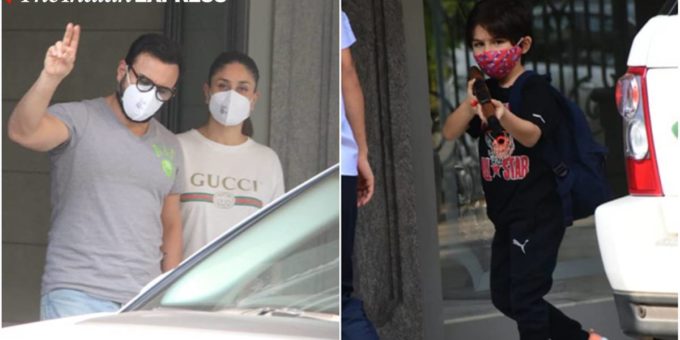 Kareena Kapoor Khan was spotted walking out of her father Randhir Kapoor’s house on Saturday afternoon. She was accompanied by husband and actor Saif Ali Khan and her younger son Jeh Ali Khan. While Kareena wore a Gucci white top, Saif wore a plain grey t-shirt. Saif waved at the photographers as he was getting inside the car.

Taimur Ali Khan also caught everyone’s attention with his cute pose. Our shutterbugs clicked his photos as he was seen walking inside Randhir Kapoor’s house. In a set of photos, Taimur is masked up and seen pointing a toy gun at the photographers. The picture instantly went viral on social media platforms.

Earlier in the day, a video of Taimur also went viral in which he is seen trying to grab an ice-cream from a Turkish ice cream vendor.

Recently in a conversation with Cosmopolitan India, Kareena revealed that when she is not working, her days revolve around her sons – Taimur and Jeh. “My entire day revolves around the kids, at least on days that I am not working. I am focused on what they are doing, setting up Taimur’s classes, dividing my time between both of them, and figuring out my own nap times according to when my younger one falls asleep. Your entire life becomes about the children,” she said.

On the work front, Kareena will next be seen in Laal Singh Chaddha where she stars alongside Aamir Khan.