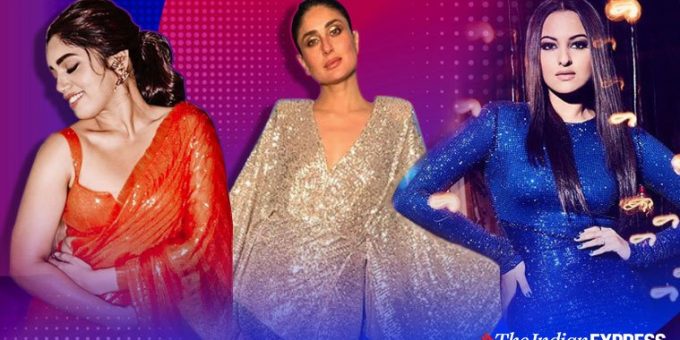 Every year, there is one trend or the other that becomes more conspicuous than the rest. It could be something from the past, like animal print, or something new, like a dress with a contrasting sash. This year, we noticed many celebrities opting for glitter or sequinned ensembles. Yes, you guessed it right. With a month left for the year to end, the verdict is out and clear: sequins is the trend that dominated 2019.

In case you have your doubts, here are some examples.

Bhumi Pednekar, who is busy with the promotions of her upcoming film, Pati, Patni Aur Woh has clearly been a fan of sequins. She was recently spotted in two different looks and managed to impress us in both. The one we really liked was the tangerine Manish Malhotra sequin sari. The look was rounded out with hair tied in a messy bun and bright lipstick.

In another look, she was spotted in a sequin blazer and trouser. Paired with a bralette top, the ensemble looked risque and made for a great party wear.

Ananya Panday, her co-star in her upcoming film, also has made her love for sequin evident. She was recently spotted in a sequinned red blazer dress. The look was rounded out with matching nail polish and smokey eyes.

Sonakshi Sinha too was spotted in a blue sequinned dress. Styled by Mohit Rai, the actor looked pretty in this midnight blue dress from Alexander Terekhov. The look was rounded out with poker-straight hair, blue nail polish and smokey eyes.

Rakul Preet too joined the bandwagon as she was seen in an ensemble from Vizyon. The sequinned top was balanced by teaming it with matching trousers sans the glitter.

Our favourite look, however, remains that of Kareena Kapoor Khan. Styled by Tanya Ghavri, the actor was seen in this risque outfit from Michael Costello. Styled by Tanya Ghavri, the attire stood out for the sharp V-neck, thigh-high slit and elaborate sleeves. The look was rounded out with hair tied in a neat bun and some glitter details on the eyes.

Who do you think looked better?