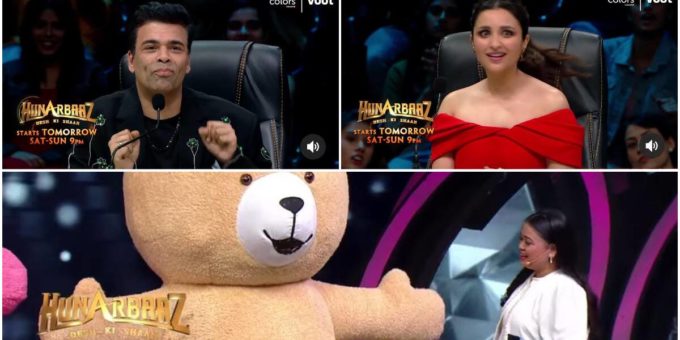 In a promo shared by Colors on its social media platforms, filmmaker Karan Johar, who is currently judging the channel’s talent reality show Hunarbaaz along with actor Parineeti Chopra, took some time off during one of the shoots to perform daddy duties. He made a video call to his twins, Yash and Roohi, and told them, “Hi, baby, I just called to say goodnight.”

Parineeti Chopra, sitting next to Karan, also spoke to the twins and sent them her love. She said, “I love you 1,021.”

After the call, Karan took out his phone and recorded a performance of two people dancing in teddy bear costumes for his children. He said, “My children will be very excited to see this. It feels like we are watching a live performance in Disneyland.”

Though this performance, the show’s hosts — Bharti Singh and her husband Haarsh Limbachiyaa, who are all set to embrace parenthood — shared an ‘aww’ moment when the former went and hugged one of the costumed dancers.

Along with Karan and Parineeti, senior actor Mithun Chakraborty will also be on the judges’ panel of Hunarbaaz. The show will feature people from across the country displaying their talents. It launches on  Colors TV tonight at 9.00 PM.

Double wedding in Shetty family in 2022 – Ahan Shetty and Athiya Shetty to tie the knot this year : Bollywood News