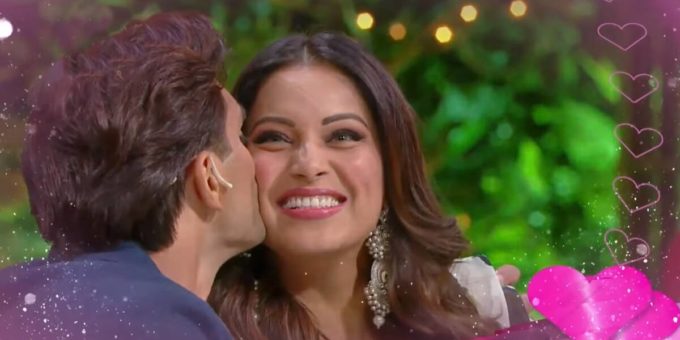 Star couple Bipasha Basu and Karan Singh Grover are set to make Valentine’s Day, extra special for fans. The two will appear in the upcoming episode of The Kapil Sharma Show, where they will reveal several husband-wife secrets.

In a promo released by Sony TV, we get a glimpse of the fun-filled episode. From host Kapil teasing them with couple jokes to Kiku Sharda getting Bipasha to shake a leg on her chartbuster song “Beedi”, the episode is set to be a treat for viewers. In one portion of the video, Kapil tells them, “Yeh woh log hote hain jo apni suhagraat pe doodh nahi, protein shake peete hain (Fit people like them don’t drink milk, but protein shake on their first night post marriage).”

Kapil Sharma will also quiz Karan Singh Grover about his love for tattoos. Kapil will ask how many more tattoos Karan intends to get to ensure he doesn’t need any clothes. While Karan will be left in splits, Bipasha will add that Karan is fond of clothes — so he loves to be in them and even be without clothes!

Bipasha and Karan will be seen playing compatibility games too. They will also talk about life as one of the power couples of Bollywood.

Speaking about Karan, Bipasha previously told indianexpress.com, “He is a complete dreamer and I’m a realist. So we complement each other. Sometimes on the set I had to tell him, ‘Don’t run around so much, let me focus.’ When I am working, I like my own time and space. He respects that. He knows I’m different at work and I’m not gonna change that, even for my partner.”

Bipasha Basu and Karan Singh Grover last teamed up for Dangerous (2020), which was written by Vikram Bhatt.

Spider-Man Far From Home director Jon Watts on the surprise mid-credit cameo: It was always going to be him
2019-07-08