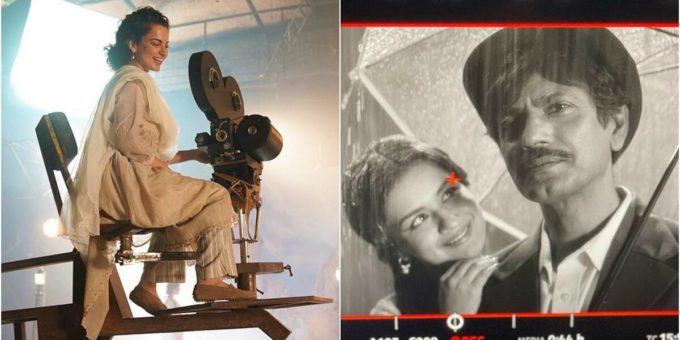 Kangana Ranaut on Thursday revealed that she found a “rare gem” on the sets of her upcoming production Tiku Weds Sheru — a Newall camera belonging to legendary filmmaker Bimal Roy. Kangana shared two clicks with the equipment while sharing her excitement in an Instagram post.

Kangana posted the images and wrote that getting hold of the Newall camera was a blessing to her as she gears up to direct her second film, Emergency. In the post, she thanked Fernando Gayesky, the DoP of Tiku Weds Sheru, for arranging the camera for her. She also expressed gratitude to Bimal Roy’s family for lending her the camera to be used for Emergency.

“This is no ordinary day, today one the sets of Tiku weds Sheru I found a rare gem, Newall camera right from the golden age of Indian Cinema 1950’s and this belonged to one of the greatest directors of all time Shri Bimal Roy ji… As I am all set to direct my second feature film Emergency this is nothing short of a blessing… What a lovely day… Thanks to the family of Bimal Roy ji to give us this precious gem for filming… thanks @donfernandodp for arranging this…,” read her caption.

The monochrome photo is a grab from the monitor on the sets. While Nawazuddin’s look is reminding us of Raj Kapoor, Avneet is aping Nargis. Kangana captioned the image, “Stuff that dreams are made of… Tiku weds Sheru..”

Check out all the photos from the sets of Tiku Weds Sheru:

Tiku Weds Sheru will mark the reunion of Kangana Ranaut with director Sai Kabir. The duo had previously worked together on the 2014 film Revolver Rani. Kangana had last month unveiled the first look posters of Nawazuddin and Avneet from the film.

Talks between Pakistan, IMF to continue for second day today
2019-05-11